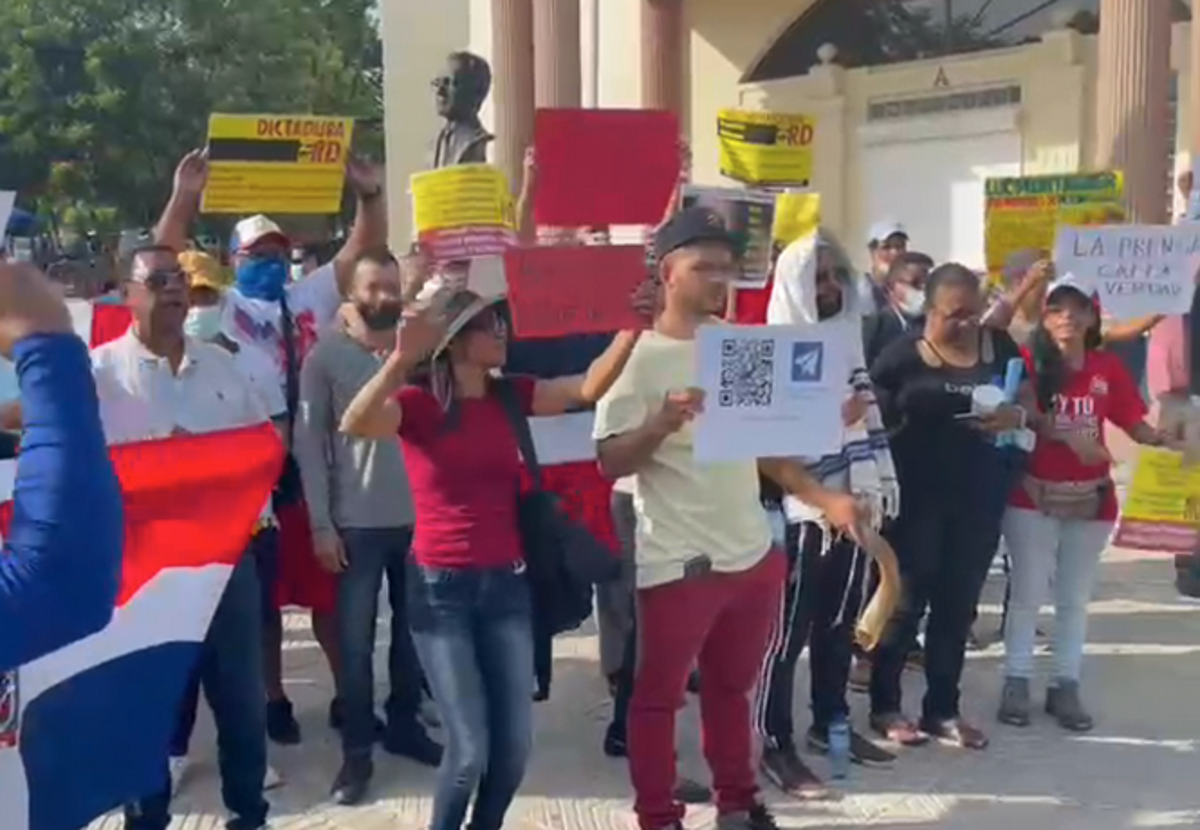 Demonstrators appeared yesterday in front of the National Palace to protest against the measures ordered by Public Health for those who do not get vaccinated. EXTERNAL SOURCE 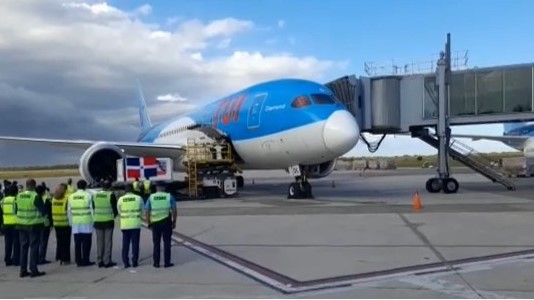 The political leader and pastor, Carlos Peña, led the demonstration in front of the National Palace, where he demanded freedom.

More than a hundred people gathered in front of the National Palace in protest against the mandatory nature of the Covid-19 vaccine.

Launching slogans that read “no to the mandatory vaccine, if we live in freedom, why do they want to force us?”

The protesters criticized that people who have not yet been inoculated against the coronavirus do not want to let them use the Metro, the cable car, entering universities, and other spaces.

The protest was called by the political leader and pastor Carlos Peña, who expressed his opposition to the measures ordered by the Ministry of Public Health and claimed the right to freedom that all Dominicans have to move freely.

The protesters are made up of the Los Hijos de Duarte movement and pastors and independent people, who assured that no one would make them get vaccinated because they are not laboratory mice.

Mrs. Gladys Félix reported that they filed an emergency appeal for the Dominican American to allow a young man to graduate who is prevented from receiving it because he does not have the vaccine.

Félix said that all the rights of people who do not want to be vaccinated are being violated in the country.

She reported that they would install a permanent camp in front of the Government House until President Luis Abinader lifted the restrictions regarding the Covid vaccine.

On her side, Marlene Abreu said that all they ask is that Dominicans who do not want to be vaccinated give them the freedom to lead an everyday life, like those who have been vaccinated, because they have the right to free movement.

She said that her refusal to receive the vaccines is that they are experiments that no one is responsible for the damage they can cause to human beings.

Some protesters dared to say that this virus was launched from the air by plane and that now they use human beings as guinea pigs to do experiments without explaining the reasons.

Others attacked the Dominican press and dared to say that it has sold out to the Government.

CONTROVERSY
One of them was Elvis Samuel Méndez, who claimed to be a chiropractor and made it clear that neither he nor his children would be inoculated. Moreover, he said his children have never been vaccinated because he does not lend them to experiments.

Dictatorship.
He explained that the provision around the vaccine is a dictatorship, after adding that he is not opposed to anyone who wants to vaccinate to do so.

And I should also have the freedom to walk around naked everywhere, especially the metro and the university, and drive at 140 km in front of primary schools, yeah! freedom!

Well, bobby, walking around nekkid is hardly an equal comparison to being forced to inject poison into your system by gubmint or else you lose your right to freedom of movement and food.

It’s clear the pro-vaxxxers just can Nazi what they are advocating.

You Sir are a idiot. I’m sure you can figure out that scrambled word.

Bobby, these shots are unsafe. They are poorly tested and over 16,000 people have died after getting them. 7times greater chance of catching a varient after getting the shot that people who do not get the shots and no one knows the long term FX. Colin Powel was fully vaccinated and he got covid and died. He was a Retired General in the USA (In case you haven’t heard of him) The vaccines are not even approved yet. You are free to get them if you wish. But trying to bully others is not going to help keep you safe.

Good start, these measures have been protested all over the world but the mainstream medias won’t show you that to make you think that you are alone fighting them.
It’s obvious now it was never about a virus, it’s the New World Order Mark Of The Beast Satanic Agenda 21
ID 2020 Global Identity

You are correct: THis was never, ever about health. It is about control.

And if anyone thinks these Dominican tyrants will remove restrictions if 70% get EGT’d, you are the problem. YOU are a compliant, delusional serf.

Every second, every minute, every hour, every day, every week, every month, every year people die in the world…and it ain’t from covid…

What does a European tour operator’s plane have to do with the article?

We have a scheduled trip to DR in a couple months, but between not everyone in our party being vaxxed (I know they won’t enforce at resort) and possible protests and tense situation… rethinking.

Don’t come. They are enforcing it now T resorts. Go to Mexico or anywhere else that doesn’t have Tyranny!

We are USA Citizens who are leaving the USA partly to get the freedoms that are being taken away from here day by day. We planned to live in the DR. Hope they don’t try to force us to get dangerous, sometimes deadly, poorly tested shots. We will not. Besides the fact that they are developed using aborted baby parts. NO WAY, That is evil.

Here is worst and getting worst.