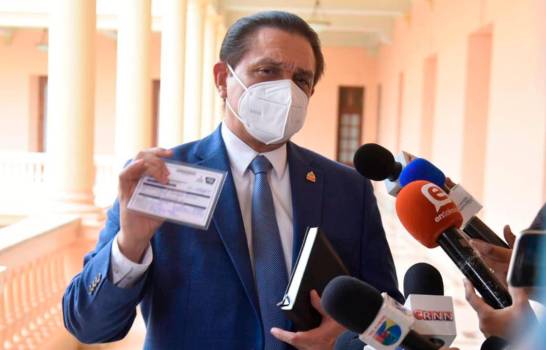 The lawsuit was filed by attorney Yan Carlos Martínez Segura

The decision of the Ministry of Public Health to order the presentation of a vaccination card against COVID-19 to access places of public use meets legal objections that must be decided in the courts of Justice.

The Presidency of the Civil and Commercial Chamber of the National District Court of First Instance formally summoned the Presidency of the Republic, the Ministry of Health, and its head Daniel Enrique De Jesús Rivera for allegedly “having various constitutional violations” regarding the obligatory nature of the vaccination card.

The appointment was dated for Monday, October 18, at 10:00 in the morning.

The appeal for protection was filed motu proprio by the lawyers Yan Carlos Martínez Segura and Eli Saúl Barbi Castro, who requested that the procedure be declared of extreme urgency and be known before October 18 of this year 2021.

The lawyers raised their instance against the Presidency of the Republic, represented by Luis Abinader – and the Ministry of Public Health, in the person of its head Daniel Enrique de Jesús Rivera Reyes.

They argue that the Public Health provision violates articles of Constitution 38 (Human dignity); 39 (Right to equality); 40 (Right to liberty and personal security); 42 (Right to personal integrity); 62 (Right to work) and 74 (principles of application and interpretation of fundamental rights and guarantees).

In addition, articles 3 and 4 of Law 107-13 on the Rights of People in their Relationships with the Administration and Administrative Procedure.

“Because there is a serious threat to the fundamental rights of the community, as a result of the plaintiffs, a threat that involves the limitation of broad constitutional rights, to millions of citizens with unsuspected consequences and generating consequences that even disturb the peace and public order, generating chaos, violence and disorder on the roads, public transport and recreational spaces,” the document, dated October 10, argues.

What a tyrannical pile of Trujillo.

There is NO science behind this mandate, just government control.

The PRM is no better than Chavez or Castro as far as I am concerned. The DR is becoming a banana republic. I will offer time and treasure to kicking these PRM thugs to the curb.

FACT: THESE COVID VACCINES DO NOT SLOW THE SPREAD OF THIs INCONVENIENT VIRUS.

Another fun fact: ALL. THE. FERRETS. DIED.

I have my doubts but I hope the challenge wins…stop these demented mandates…resist!!!

It is far easier to fool people than to convince them they have been fooled.

If vaccinated persons are 8 times less likely to contract the virus, then they have nothing to fear from unvaccinated who have a 99.5% chance of survival IF they even catch Covid in the first place which is avoidable if one takes the right precautions: mask, social distancing, hand washing, which the vaccinated also have to do as well. To restrict part of society from participating is nothing short of authoritarian tyranny. Both the WHO and CDC have officially declared that the vaccine is not going to end the pandemic. How long are these mandates going to last? To what other aspects of our lives will they be applied? What’s next? Where does it all end and when?

Think this is about a virus and your wellbeing? Think again: https://www.youtube.com/watch?v=QMs7uqXLLEA