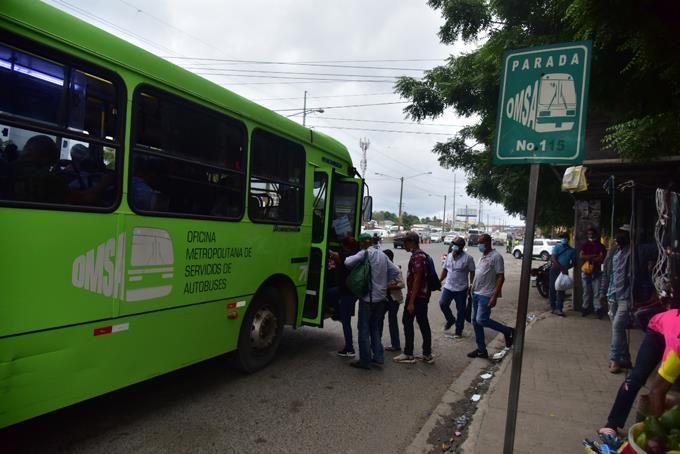 Bus of the Metropolitan Office of Bus Services (OMSA) board passengers without requiring a vaccination card.

Blinded by the heat and overwhelmed by the traffic jams that usually characterize the capital’s main roads, most of the public transport drivers ignored requiring the vaccination card from passengers, and social distancing before boarding the vehicle.

Once the bus, car, or guagua parked at the established stop, the passengers jumped on them after exhausting a massive line for hours and without showing vaccination cards, having as their only priority reaching their destination before the fall of the rain glinting from the gray sky in the afternoon glow.

During a tour made by Listin Diario, it could be seen that the driver was not interested in the passenger showing that he had been inoculated against the disease. Instead, his objective was to ride six passengers and return for six more until the waiting lines were reduced.

Some citizens described the decision as “an impractical headache” to which they will deal with until “they get tired of forcing people to get vaccinated.” Drivers indicated that it is “a cumbersome, and unworkable idea.”

The buses of the Oficina Metropolitana de Servicios de Autobuses (OMSA), which offer service on the Duarte highway, the public cars of the “ruta kilómetro 9 con dirección a Pantoja” and the “flying” guagua buses that circulate along San Martín street were some of the means of public transportation that paid no attention to the vaccine or negative PCR test mandate.

A photograph of the vaccination card on their cell phone is one of the most common options passengers use to avoid losing or damaging them during the journey to their homes.

Others have decided to photocopy it and laminate it to attach it to their identification card to avoid mishaps, for example, when boarding the Metro.

However, the Núñez de Cáceres Corridor and the Santo Domingo Metro comply with the restrictive measure that began yesterday.

“This is an order from above that I must comply with,” expressed a driver of the corridor to a passenger who had no way to justify that he had been vaccinated because he did not have his certification in hand.

“I got vaccinated but I don’t have the card here, I left it at home,” said the Infotep student worried about being denied access to the bus while he went to the control so that he could “chance” a ride home.

The driver on duty repeatedly repeated: “Vaccination card and ID in hand” when a passenger made a stop.

You are allowing unvaccinated people to get to country and now disallowing them to buy food…. very logical.

Why don’t you report on the emptyness of the “supermercados” since yesterday. LOL

do not give in to this vaccination bullshit. it is not the governments job to force people to put something in their bodies that they do not want to. especially when it is proven that the vaccines do nothing. they do not prevent the virus nor the spread. this is illegal what this govenment is trying to enforce. it goes against human rights and freedom. do not do it. wait to see if the courts overturn this nonsense. if not, stop shopping in the bigger outlets. when they realize their profits disappear, they will make the government overturn this bullshit.

You don’t think the PoohBah’s have not been paid off by Big Pharma and the globalists WHO?

This was NEVER about health.

do not give in to this vaccination nonsense. it is not the governments job to force people to put something in their bodies that they do not want to. especially when it is proven that the vaccines do nothing. they do not prevent the virus nor the spread. this is illegal what this government is trying to enforce. it goes against human rights and freedom. do not do it. wait to see if the courts overturn this nonsense. if not, stop shopping in the bigger outlets. when they realize their profits disappear, they will make the government overturn this nonsense. if all else fails, lets go to the streets and halt this economy for a few days, then we will see. you realize that this says you cannot be in public unless you do as they say. do not let a few rob you of your freedom. the same enthusiasm you have when you go in the streets and halt traffic to elect these idiots, have the same for your freedom. they are few, we are more.

Lost time is lost money for the transit drivers. Checking for vaccination cards is a hinderance to them by shaving into their revenue making opportunity; i.e., one less route cycle per day. The public needs to get about in a trouble free manner.

Government offices, financial offices, and other venues where it is normal for the public to wait for a turn to be invited into those spaces are more appropriate locations for card checks. Card checks at these locations will not have an large impact on their revenue opportunity.

I was in Supermercado Nacional on Charles Sumner on Tuesday afternoon. PriceSmart as well. Nacional was a ghost town, and PriceSmart was as deserted as I have ever seen. PS had s serious vaxxx at the door who no way could read my PCR on my phone in 3 seconds. I could have used the antigen test from 3 weeks ago as far as it mattered.

These gubmint has made a serious mistake.

I supported Albunader and his crew. Now they disgust me to the core essence of my being as Chavez, Castro, and Hitler do.

Exactly. I personally know a top (top) official in this government. I sent him a text yesterday on his personal cell asking what they’re thinking. He told me they’re following what other countries are doing. It’s a terrible excuse and they’re horrible humans for even thinking of blocking people from grocery stores.

They could have done this in select locations to push their “vaccine.” But they chose to go full dictator! I’m very, very, very upset for the poor people who now have to deal with this crap.