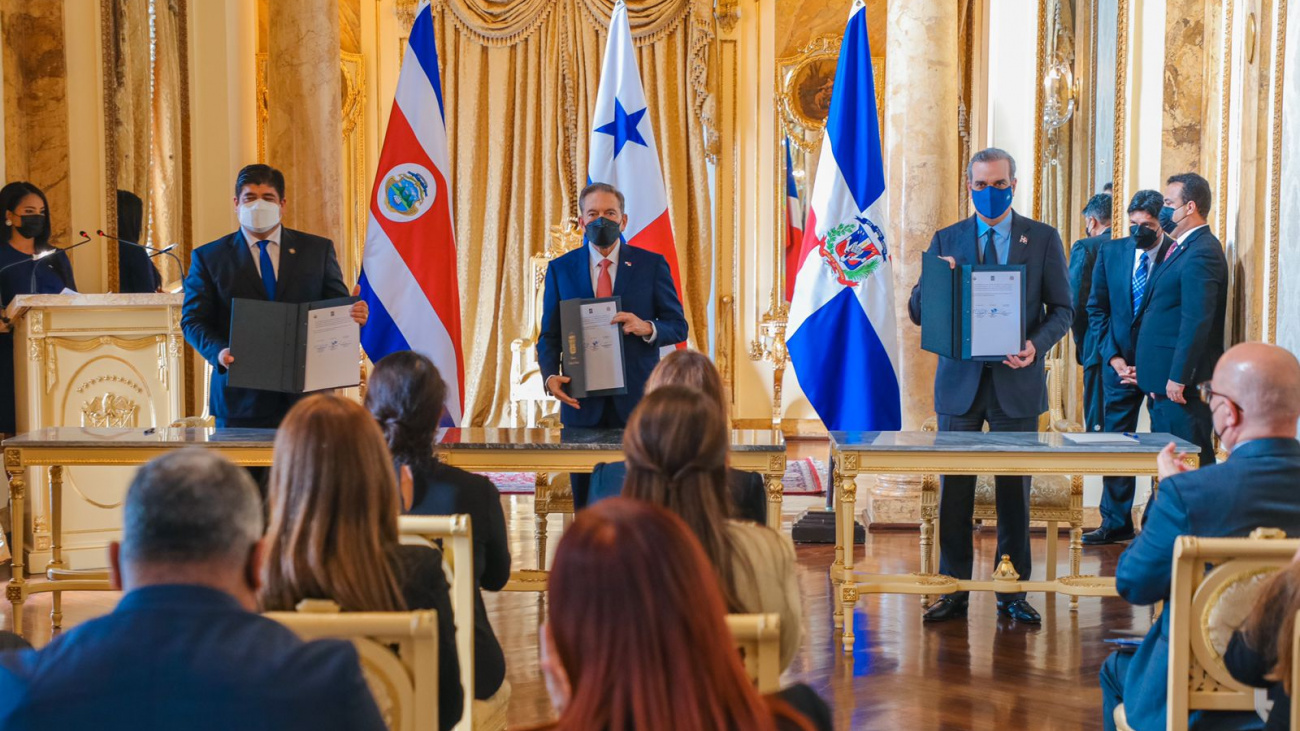 Santo Domingo.– The presidents of the Dominican Republic, Luis Abinader; Laurentino Cortizo from Panama, and Carlos Alvarado, from Costa Rica, met yesterday concerned about the situation of Haiti and its nationals in different countries of the Continent.

They called on the international community to take urgent actions aimed at achieving disarmament, job creation and recovery of the neighboring country’s watersheds.

In a joint statement by the presidents, meeting within the framework of the Alliance for Development in Democracy, they called for the disarmament and pacification of the Haitian population and the strengthening of security, as a preamble to the holding of free and transparent elections in favor of the well-being of its people, in addition to a comprehensive plan for the development and construction of public infrastructure that generates massive jobs and improves the quality of life of the Haitian population.

In the same way, they propose financing a community program to recover watersheds, reforest and restore ecosystems, which will also contribute to job creation, among other projects.

We need france, canada and USA to take in 10 million haitian and naturalize them in the respective countries they land, leave the rest of the island to DR as how it was suposed to be until france showed up in 1625 and robbed the western part of the island, haitians do not belong in the caribbean but somewhere else, lets make hispaniola for the spanish speaking people again!!

Is people like you that makes it hard for us to be one. By the way know your history better

He’s telling truth dumb ass , It was France that brought the Haitians to that side of island.

It was Spain who brought you there. The last thing you want is to mess with Haiti…they will eat you alive if you don’t behave.

Alberto, if you think Dominicans are native to this island you’re dumb

I do agree to some extent. The island really belongs to the (Tanío). Dominican Republic & Haiti are just both stolen land the (Tanío).

Let’s be honest. The Dominican Republic & possibly the rest of the world would probably still be under slavery had the Haitians not won the war.

I feel they earned there place on the island.

Here is some information I have written about the Island of Hispanola.

The whole island used to belong to the Taíno people. Before Columbus landed on Hispaniola (known alternatively as Quisqueya, Haití, Bohío, or Ay-ti (Haiti) to the natives. Later the name then changed to La Isla Española now known as the island of Hispaniola today. The whole island was once Haiti.

The separation later came after the French occupation. The 🇫🇷 arrived on the island. They fought 🇪🇸 for years over control of the island. After many years of war it was decided to split the island in half. Thus the creation of (Spanish Captaincy General of Santo Domingo) later named Republica Dominica.

Most of the Taníos were killed during Spanish colonizing. The French took control over much of the remaining Tanio people after invading the ifloodring Spanish colonizing. French then went on to flooding the island with African slaves. Haiti was the largest European sugar producer. The French overworked the soils, which Western part of Haiti unable to grow and repopulate as before. The Western side of the island was known not to have as many trees as the rest of Hispanola.

Dominicans: are a mixture of Spaniard colonists, African slaves, and Taíno natives.

Taíno: Are a mix of many different races, mostly African.

Haitians: Have less Spanish influence and “blood” than on the other side of the island in the Dominican Republic. Many Haitians have entirely African ancestry.

Is this true alberto ?

Alberto is hiding in his mom’s basement

Yeah I’m hiding your moms basement, nice BJ she’s gives, that’s (Haitians)your logic to insult someone for telling the truth, Haitians will never be free from own self, they corrupt, backstabbers , rushing to leave Haiti as fast as they can, they really don’t like us (Dominicans), they produce like rabbits, multiplying for no good reason, maybe to make the whole island a Shit-hole (like Donald Trump said about Haiti). Don’t cry General, Haitians are free to go to Africa , they so proud of Africa, one way ticket to Africa. Haiti should of NEVER happened in the Americas , it will take Haiti over 10,000 years to develop from fail state to a third world state .

The whole island used to belong to Haiti until the Spain came and divide it. So careful before Haiti comes and kick you out to Spain. You don’t even belong there.

During the colonial era on the island, there was no country. How could you claim that the entire island was DR? By the way, let me give two anecdotes: 1- Haiti was a country before the DR 2- The Spanish brought slaves from Africa to the island just like the French did. Check your history book again dumbass