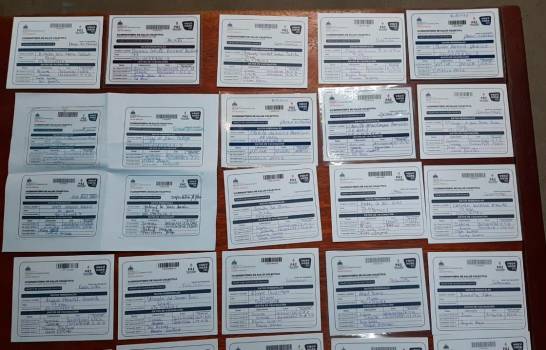 The false documents, computers and other equipment were seized. (EXTERNAL SOURCE )

The raid was coordinated by the Public Prosecutor’s Office, the Police, and Public Health.

Police officers, prosecutors from the Public Prosecutor’s Office, and inspectors from the Ministry of Public Health dismantled a copy center where COVID-19 vaccination cards were forged in Santiago. The false documents, computers, and other equipment were seized.

The authorities arrested an employee of the business.

During the operation, authorities seized 26 cards that had been forged, some of which were not yet individually cut out.

The police reported on Wednesday that it was a network that operated from this copy center. The cards had been filled out in the name of an equal number of people who, according to the authorities, will be prosecuted since they tried to benefit from a fraudulent activity that threatens collective health.

The members of the Criminal Investigations Department were placed under arrest by Charito Mackenzie Francisco. He worked in the business, where they seized a Dell computer, a black CPU, among other equipment used in this copying activity.

“The acting authorities are working on the identification and apprehension of the others involved and who would benefit from this criminal action,” said a press release from the Cibao Central Regional Police Department in Santiago.

The woman was handed over to the Public Prosecutor’s Office.

Others will take up the slack…

Imagine being arrested for doing the counterfeit of an illegal document…

Imagine! All that because you are afraid of the doctor’s office like a 3 year old girl LOL

Imagine knowing the doctors got paid by big pharma via public health to inject the population with experimental mRNA technology disguised as vaccines to control and reduce the population to meet the global goals by 2030
Imagine knowing the Rockefeller Foundation and Bill Gates, a Eugenic psychopath with no medical degree who thinks the world is overpopulate now wants the entire world injected with these vaccines.
Now imagine knowing agenda 21, agenda 30, the Great Reset, Operation Lockstep and many more…