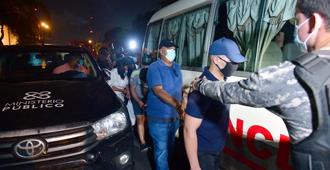 Santo Domingo.- Twelve people under the custody of the authorities and the confiscation of apartments, premises in commercial and financial centers, exchange houses, seized vehicles, firearms and other items that were supposedly used to launder drug assets, was the result of Operation Larva carried out yesterday by the Anti-Money Laundering Office and the National Drug Control Directorate (DNCD).

During the operation, officers raided the Presta Vista financial company, located in the upscale Bella Vista Mall. According to information from the Justice Ministry, this business was supposedly being used to launder drug money.

The company is registered in the name of the exchange owner Jorge Luis Herasme Estrella, who is also listed as the owner of the Dollar Express company. J.L.H. where José Aníbal González Cubilete appears as manager, one of the 16 arrested in March last year on the coast of Nigua, San Cristóbal province, when the authorities intercepted a boat with 700 bricks of cocaine smuggled into the country from Colombia.

No surprise here…it’s the powerful elite that feeds off all these illegal activities…you know, the one’s who run this country…