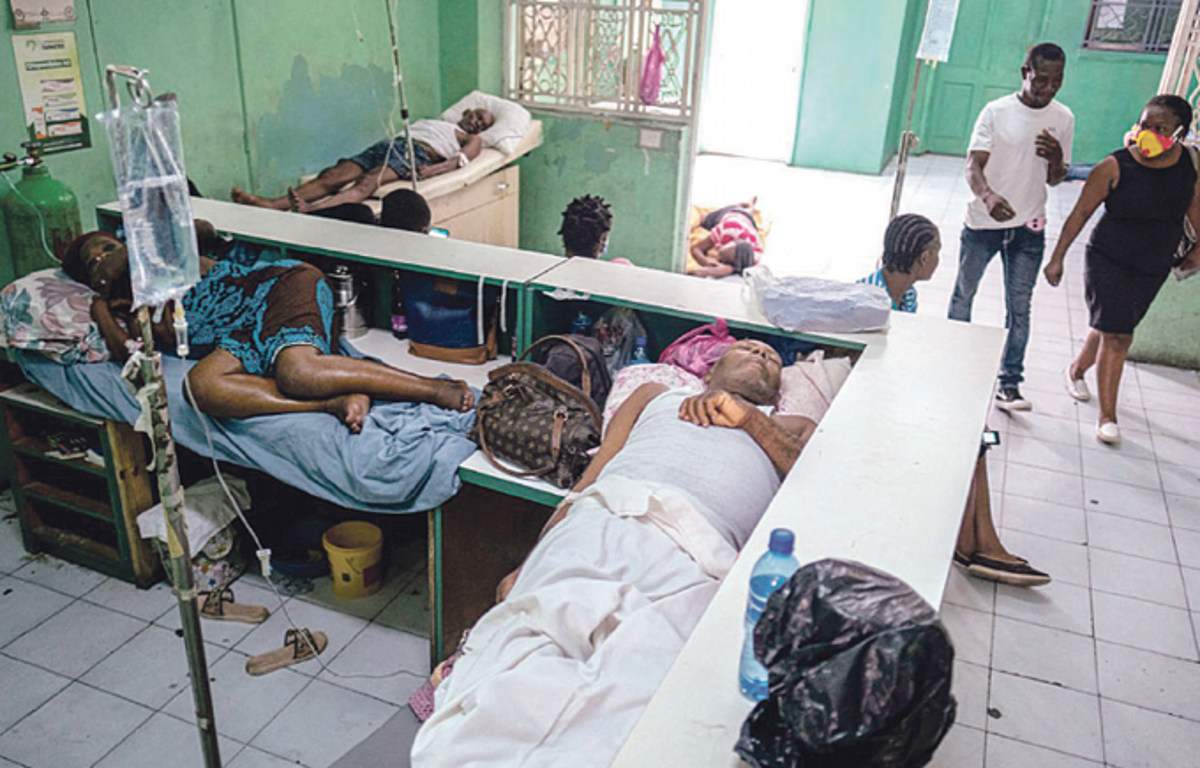 The lack of electricity due to the shortage of diesel is causing congestion in Haitian hospitals. / AFP

One of Haiti’s most powerful armed gang groups is still holding 16 US missionaries and a Canadian hostage, asking for a ransom of $ 17 million to free them.

Disenchanted by the political chaos that has prevailed for months, Haitians have been facing an accelerated degradation of their living conditions since the beginning of the week because of the gangs that control access to oil terminals.

“We are … rationing water in my house,” says a frightened Daphné Bourgoin, 42. “And for my children who have online classes, how long will the internet last?” asks the head of a textile company forced to close since Monday.

This Caribbean country never produced enough electricity to meet the needs of its entire population and, even in the most affluent neighborhoods of Port-au-Prince, the public electricity company only ensures a full delivery for a few hours per day.

Those who can buy generators: expensive equipment that is now useless in the face of severe fuel shortages caused by armed gangs. The lack of diesel also prevents private companies from ensuring the delivery of water by trucks.

As for electricity, the inhabitants built autonomous systems for water in their homes since the pipe network does not cover the entire metropolitan area.

Without a dedicated special supply, hospital structures are forced to reduce their activity drastically.

“There is no electricity in the hospital to run the appliances, there is no fuel, there is nothing,” Rachilde Joseph, a medical student in Port-au-Prince, says in Creole. Today, this 26-year-old woman, who became known for posting humorous videos on social networks, does not feel like laughing.

“We would like to stay in the country to offer care, especially to the people in the province who need it so much, but the country does not give us that opportunity,” she laments, before adding that Haiti “is going to end up losing all its young people.”

Location of Dajabón
Residents of Dajabón have to queue for up to three hours at fuel stations to stock up, as demand has increased in the wake of the Haitian crisis. This was announced yesterday by the mayors of Dajabón, Santiago Riverón, and the mayor of Restoration, Euclides Valerio. They were interviewed in the corridors of the National Palace upon their departure from the office of the administrative minister, José Ignacio Paliza.

While yesterday more soldiers arrived to reinforce the border in the area of ​​Dajabón, given the conflict situation in Haiti and the shortage of fuel.

More military to the border
The Specialized Border Security Corps (Cesfront) director, General Frank Mauricio Cabrera Rizek, said that it is forbidden to sell gasoline to Haitians in jugs; they are only allowed to stock up on fuel for vehicles.

Riverón reported that the traffic of fuel creates the situation to the neighboring country, for which they use various tricks, such as throwing full barrels into the river where customers then pick them up from Haiti.

“There is a lot of smuggling as well, because the fuel is being thrown down the banks of the Massacre River. The military is doing its job, but that border is very porous,” Riveron said.

He explained that the agricultural sector is the hardest hit because producers can no longer buy gasoline to fuel their work equipment because the guards seize them and seize their vessels.

“This is creating serious problems for us, because for Haitians the fuel is coveted, since in their country a gallon of gasoline costs almost 700 pesos,” he added.

“The border in the Dajabón area is very tense right now, because of the situation in Haiti, especially because of the shortage of fuel in that country, so hundreds of motorbikes cross the border to supply themselves. This is why Dominicans have to stand in line for two and three hours to refuel,” said Mayor Riverón.

If a solution isn’t found soon, it may just be a matter of time until thousands of Haitians start massing and crossing the border forcefully..

We will forcefully remove them simple, we legalized all the Haitians we could. Now the moment they start to force they way into our country who’s barely getting by we will react and very negatively. For over 50 years the haitian govt. has been Nuthing but taking advantage of all the services we barely have , hospitals , school everything Haitian woman coming over for years to give birth and then we’re stuck with the hospital bill the child stays in the country
HALF THE TIME THe parents GET DEPORTED OR JUST ABANDON THE CHILD . And that’s not the worse part there’s over 500k in the country 75% are men… seriously??? Send them all back keep the good looking woman lol just saying

A hell on earth place