The military high command is installed on the border with 11,000 soldiers. 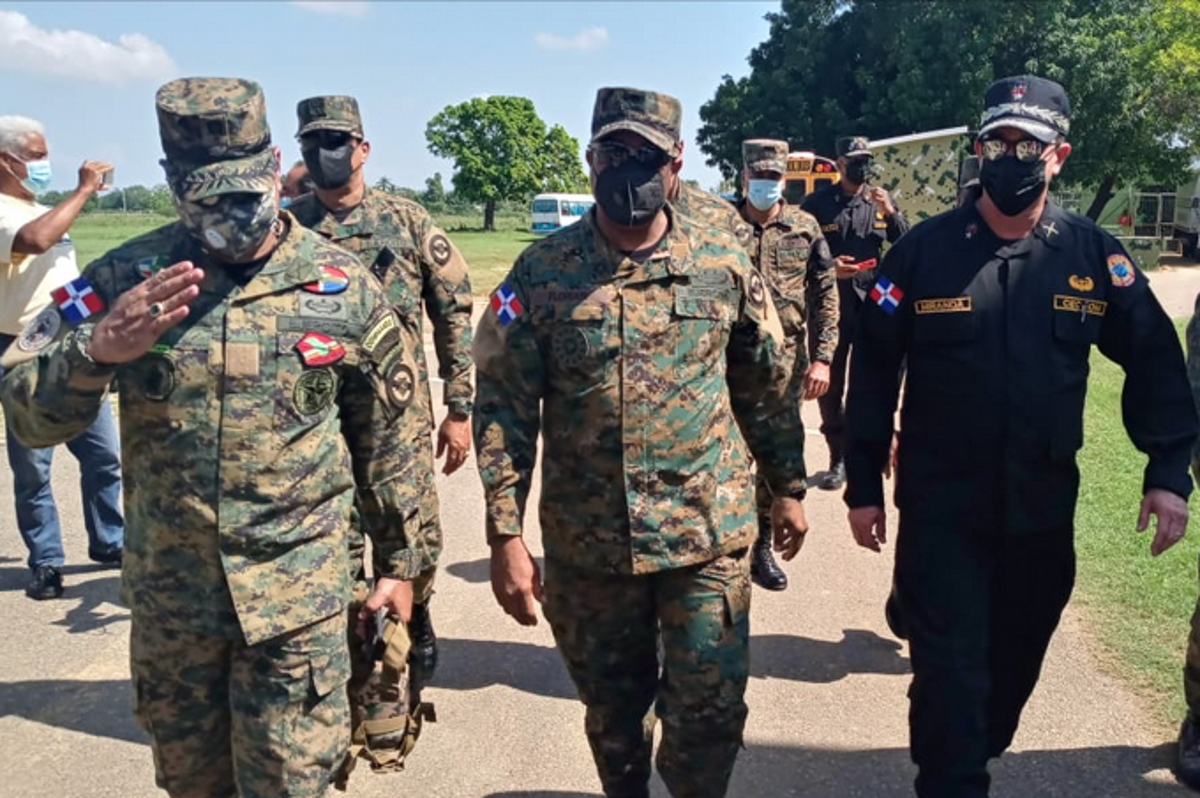 The commander of the Dominican Army toured the border yesterday and highlighted the presence of close to 11,000 military personnel in the area.

The general commander of the Dominican Army, Major General Julio Ernesto Florián Pérez, conducted a tour of the border zone, including the Dajabón pass, to supervise the military’s surveillance work in the area.

During the tour, the military chief, accompanied by the general director of the Specialized Fuel Control Corps (CECCOM), General César A. Miranda, also supervised fuel sales in the stations located on the border, which he assured were carried out in order.

Military presence
Florian Perez highlighted the presence of more than 11,000 members of the Armed Forces in the border zone, spread from Montecristi to Pedernales, to guarantee the security and tranquility of the National territory. The Army Commander General was also accompanied by the Dominican Republic Army Inspector General, General Ángel Camacho, and the Commander General of the Fourth Infantry Brigade, Colonel Germán Rosario Pérez.

Binational Market
Thousands of Haitian buyers and sellers crossed into the Dajabon market this Friday to stock up on food products, despite the protests and riots that have been registered in recent days in Haiti due to fuel shortages and gang violence. However, the foreign nationals took many products and merchandise back to their country in vans, carts, three-wheeled motorcycles, and on their heads, which caused a massive traffic jam at the border crossing between Dajabón and Juana Méndez (Haiti).

During the development of the commercial activity, strict vigilance was observed by members of the Specialized Corps for Land Border Security (Cesfront), who prevented the crossing of Dominicans to the neighboring nation.

On Friday, the population of Juana Mendez, Haiti, was calm.

Gangs condemned
Haitian Prime Minister Ariel Henry condemned gangs and kidnappings in a speech broadcast Friday. He also assured Haitians that the country was not running out of fuel despite severe shortages that have frustrated millions of people and sparked recent strikes.

It is the first time Henry has acknowledged those problems in a public speech since the Oct. 16 kidnapping of 17 members of a U.S.-based missionary group. The 16 Americans, one Canadian, and their Haitian driver were abducted during a surge in abductions by criminal groups police are struggling to control.

“If they don’t stop their crime, the law will be applied to them,” Henry said in his message. “The only option for the bandits and their sponsors if they don’t want to change their profession is imprisonment or death.”

The leader of the 400 Mawozo gang that kidnapped the missionaries, including five minors, said he would kill them if authorities did not comply with his demands. Henry also condemned those who help the criminals by giving them weapons, ammunition, and money, including “all those who negotiate with them so they can take power. They are all enemies of the Haitian people and we treat them as enemies.”

What he found in Haiti
Broken
Henry noted that he became prime minister about three months ago after the July 7 assassination of President Jovenel Moïse and found a “broken country, divided, with a worn-out state whose democratic institutions are deficient.

Evils
“The nation lives under the thumb of bandits. Citizens cannot leave the capital to go to the south. The economic situation is dire. Inflation and the high cost of living keep a grip on national life. The budget deficit has reached an unprecedented level and the gourde (currency) continues to devalue drastically against the U.S. dollar,” he said.

The government has added an additional 1,000 troops to the 10,000 already there for the past year.

What needs to be done is to stop the mafias from smuggling illegals across the border. If the mafias were shut down the movement of illegals into the RD would be a trickle of what it is at this time.

I agree, and the gangs should also stop the movement of dominican goods into Haiti. Only necessities should be allowed into Haiti. Hope the gangs use their newfound power to protect Haitian national production.