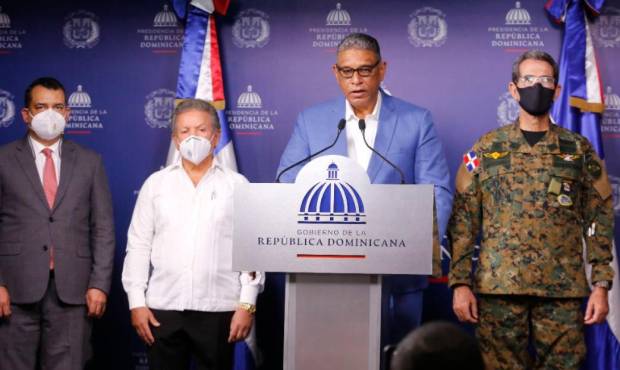 Santo Domingo.- Every day that passes the crisis in Haiti touches bottom, until now the international community does not act to stop a cataclysm in that nation, the poorest in America, in which criminal gangs have control of part of the territory.

Faced with that calamity, on this side of La Hispaniola, the Dominican Government has strengthened immigration measures to prevent the gangs from penetrating the border , where more than 3,000 soldiers were added to the more than 10,000 who patrol it.

Last night, the National Immigration Council (CNM), after almost four hours meeting with President Luis Abinader, defined four measures, since “in the face of the progressive deterioration of the political, economic and social conditions in Haiti, we must act with responsibility and firmness to protect int security.”

Here we go again pushing the Haiti narative WE DONT FUCKING CARE ABOUT WHATS GOING ON IN HAITI WE CARE ABOUT THE DOMINICAN REPUBLIC HOW ABOUT YOU FOCUS ON OUR LITTLE PART OF THE ISLAND ….

Well the house been on fire for ever
Is time to let it burn and focus on our house who’s gonna also burn down if we don’t pay attention.

Well said. DR’s only responsibility is to completely seal the border. What Haitians do in Haiti is none of DR’s business.

For every 1 Dominican woman that gives birth in the Dominican Republic there’s approximately 70 Haitian women that give birth in the Dominican Republic. A third world country that’s already in financial straits has to aid the poorest country in the Americas with no assistance from other countries yet has to bear the scrutiny of the entire world with zero assistance from other countries. How about maybe we look at France to give reparations to the Haitians who they not only enslaved but made them pay an insurmountable debt that left them in ruins in the first place or literally any other first world country instead of blaming their neighbor (who again is incredibly poor and can barely afford to care for its own citizens) for the daily problems that occur in Haiti.

Well that’s another huge problem , the colonizers don’t want to be held accountable for their wrong doing, literally they are responsible for a lot,
And no one has held them accountable
In the US for example mass killings of over 50 million people , rapes , these people literally stole a whole continent,
AND NO ONE can do enything about it because they have the most weapons, money control smh, it’s absolutely wrong. Haiti is a direct image of what will happen to a country if the colonizers
Aren’t in control , they will starve the nation to death 💀 and forget about it now is 10 times worse with oil prices so high, I feel so bad for these people, only one who can help is either russia or China and I believe that’s why their president was killed, what choice do they have ? Only an alien invasion I guess ? Or take over our side of the island with help from the Chinese and Russia

I really like this article.. keep writing about all the news that affect our Haitian neighbors because the people from the Hispaniola is very interested in knowing. Excellent job!!!👍🏼

North Amercian don t care about Latin American as a result, immigrants flood at tje american borders.. we can t just look at the other way