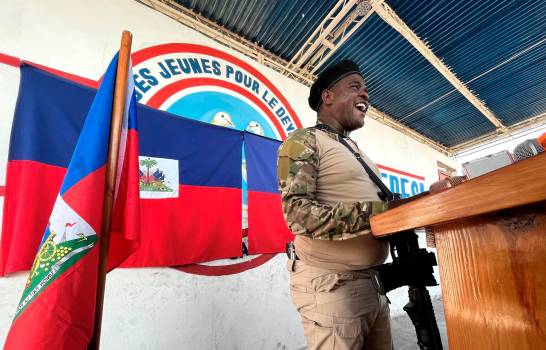 Gang’s leader, “Barbecue,” said that the key to the country would be handed over to a new class of civil society men and women.

The largest conglomerate of armed gangs in Haiti, G9 Fanmi e Alye, reiterated its demand for the resignation of the Prime Minister, Ariel Henry, and threatened to oust him from power “at the cost of blood.”

The leader of the group, Jimmy Cherizier, alias “Barbecue,” summoned the national and international press in the Port-au-Prince neighborhood of La Saline to demand “the immediate resignation” of Henry, “especially since he is suspected of having participated in the odious and vile assassination” of President Jovenel Moïse, perpetrated July 7.

“Barbecue,” said he is ready to oust Henry from the Prime Minister’s office at all costs, even “at the cost of blood.”

Then, he assured, “the key to the country will be handed over to a new class of men and women of civil society who will have to play the good governance card” to get Haiti out of the quagmire in which it has been mired for years.

In his opinion, the current situation in Haiti is the responsibility of “the 5% of the Syrian-Lebanese population mixed with politicians” for their “bad government for more than 50 years,” and they were also “the ones who distributed the weapons in the popular neighborhoods.”

The bourgeois and the politicians are the ones who “distribute these weapons in the working class neighborhoods to achieve their personal interests. To control the system. Today, we choose to take them, to use them against those who gave them to us, to liberate the country.”

Haiti is experiencing one of the biggest crises of violence in recent years, a consequence of gang activity, which has caused the exodus of thousands of people from their homes due to clashes over territory.

The gangs are also responsible for hundreds of kidnappings and have paralyzed fuel supplies for several weeks. However, in recent days the authorities have managed to bring fuel back to hospitals and several gas stations.

The news is the Dominican Republic is providing gund and ammunition for a long time now to the same gang in Haiti that kidnapped the 17 American Missionaries…Swallow that.

Where’s the evidence or proof that you have, or links ? You are talking trash , to get some attention. What a bunch of bologna you talk, makes me laugh. lol (Haitians logic = it’s Dominicans fault that their country is a shithole)

well uhhh yu have a good point, but you cant prove it thats were we win.
but my opinion honestly we have a gang in haiti … we should shit
900billion in imports .. we need some one to help us deliver our goods
And honestly i wouldnt even call them a gang lol
well yea i will just call them a gang of idiots with guns… lol

This is such a complex and complicated situation that the words ‘’idiots’’ ‘’blame’’ and ‘’gangs’ ‘don’t even skim the surface of this issue, something has to give, plain and simple, even if successful BBQ, would be at a complete loss after overthrowing the present actors, you need a contingency plan, and this is where we have a problem, corruption is so imbedded in Haiti, that the purist of intentions would fall prey to its present state, I can’t offer any solutions but we need to help these people, or we will witness a very bloody civil war.

Nothing wrong with a civil war, it might provide the necessary cleansing.

Looks like some rush to give an opinion before even taking the necessary time to read carefully and think before talking. The guy in cuestión said himself that THEIR GOVERNMENT is the one that has been supplying them with the guns and ammo. Not a foreign power not their neighbors not the Dominican Republic but THEIR POLITICIANS, and that can clearly be confirm by the fact that the past president supplied Haitians gangs with guns and military equipment for his own protection. Where do they get their weapons from? Their armed forces. Dominican Republic has its own issues to put up with. And I won’t get deeper into this but you need to know at least a bit of the history of both islands in order to give an accurate opinion pal. Get a taste of this. Figure the United States supplying Russia with weapons. Think a bit about that my friend and find some logic to it.

I agree. The gangs should take down the entire Haitian government. If a civil war comes after that so be it. Sometimes a civil war is needed to move a society forward.