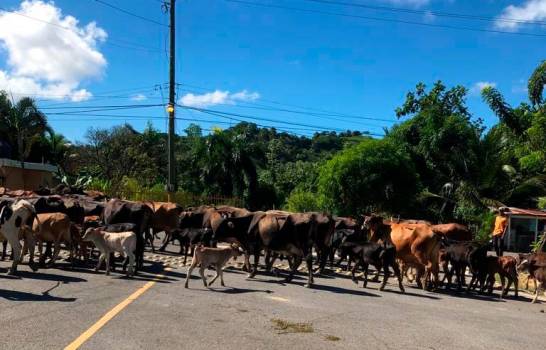 Traffic accidents caused by collisions with animals are reported.

The incursion of animals on the roads has generated concern among the citizens of the country’s eastern region since it can cause serious traffic accidents.

This sudden appearance of animals, wild or domestic, is increasingly frequent on the roads of El Seibo, Hato Mayor, and San Pedro de Macorís, which, in the opinion of the citizens, forces the authorities or livestock owners to take measures.

Cows, horses, mules, donkeys are some animals that frequently appear on public roads, both during the day and at night.

After the encounter, repeatedly honking the horn or flashing lights may prove useless, as the animals in these environments are often disoriented.

In El Seibo, the situation is worrisome.
The president of the Chapter House of El Seibo, Luis Chalas, said that since past administrations, they have suggested to the mayors that they appoint people in charge of stopping these animals.

Previously he said that there was a team trained to reduce the situation of the animals on the highways.

“There are a great number of accidents that have occurred on the different highways, such as in the community of Pedro Sánchez and on the roads of Hato Mayor and Seibo-Cruce,” he said.

Chalas further said that, despite the situation and the efforts, there had been no way to appoint personnel to apprehend the animals that appear on the highways.

He added that owners of cattle that roam on public roads should be fined.

The official explained that the situation was problematic. At the same time, he recalled that one night in the community of Pedro Sanchez in this province, along with a fellow worker, they had a collision with a cow.

“Renegado, was almost killed and had to be admitted in serious condition to the Antonio Musa hospital in San Pedro de Macoris. The owners of the cow removed the brand, so that it could not be determined who the owner was,” he said.

On his side, the director of the Environment of this city, Carlos de la Rosa, said that the city council should place personnel on the highway as far as the province’s jurisdiction is concerned to catch the animals.

“That is terrible, at any moment you can have an accident. I was coming from Miches yesterday and for a little bit we were upset because we hit a mule that was wandering on the road,” he explained.

He added: “this is the responsibility of the city council and the director of Pedro Sánchez, because when they catch these animals they charge a tax for this and the situation is very alarming,” he said.

A similar situation in Hato Mayor
The alderman of Sabana de la Mar, in Hato Mayor Province, Luis López, said that there had been several deaths of people who have had accidents with these animals in that locality.

“I myself had an accident a few years ago and I had a cranioencephalic trauma, when I collided with a horse,” he related. He also said that this situation is more frequent on the roads of Sabana de la Mar-Miches. Furthermore, he described the area as a “terror” at night.

He pointed out that this locality is very vulnerable and critical regarding cattle trespassing on public roads.

Mr. Bernardo Zorrilla, from the province of San Pedro de Macorís, said that there is a large number of cows on the Mata Palacio highway, which could cause the death of people who travel on this road to collisions or evasive manoeuvers.

“I travel a lot at night in my vehicle and almost the entire road is full of animals, more during the day than at night, unfortunately we have to put a cost to that,” he said.

The animals on the roads have been and are part of the daily routine within the rural nature of the east, a habit from its present and past farming history. The explosive growth of population, development, and vehicles has encroached into the ranges of the animals. The intruders want the livestock owners to make changes to accommodate them. What are the intruders willing to do? There has to be a balance to protect both sides safely. Subsidized fencing, reflective ear tags, and better road hazard signage would be a start for the livestock owners. Vehicle operators need to slow down, use bright lights, keep eyes moving over road, and keep close to road center. Above all no drinking before driving.