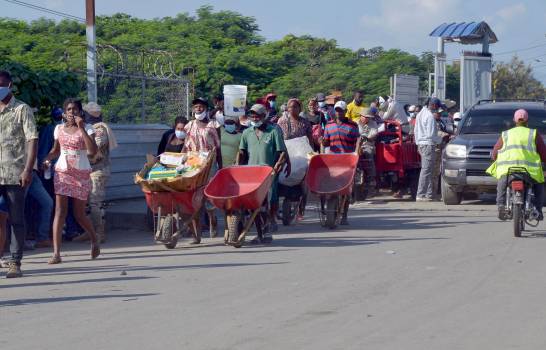 Dajabon, Dominican Republic.- The border is quiet “open, sealed, secure” and jealously guarded by 12,000 soldiers, with assault vehicles, special units such as the Commando Unit and the Hunters Battalion, as well as a system of cameras for video surveillance with drones, the troops are prepared to respond to “anything.”

The commander of the Fourth Infantry Brigade in the northwest, based in Valverde, Colonel Germán Rosario Pérez, made the statement during a tour of the northern border with the Minister of the Interior and Police Jesús Vásquez, after the opening of an office for the registration of foreigners in this municipality.

The border gate was opened from 8am Monday, when the doors of the border bridge were opened to vent the crowd that from Haiti is rushing to market various products and belongings in the Binational Market in Dajabón.

“The border is calm, do not be carried away by ominous voices, we are a country of peace, an army of peace, but prepared for any threat, because security and sovereignty are above all.”

How can a border be sealed and open at the same time????? The Haitian gangs need to get to the Haiti side of the border and make sure it is truly sealed.