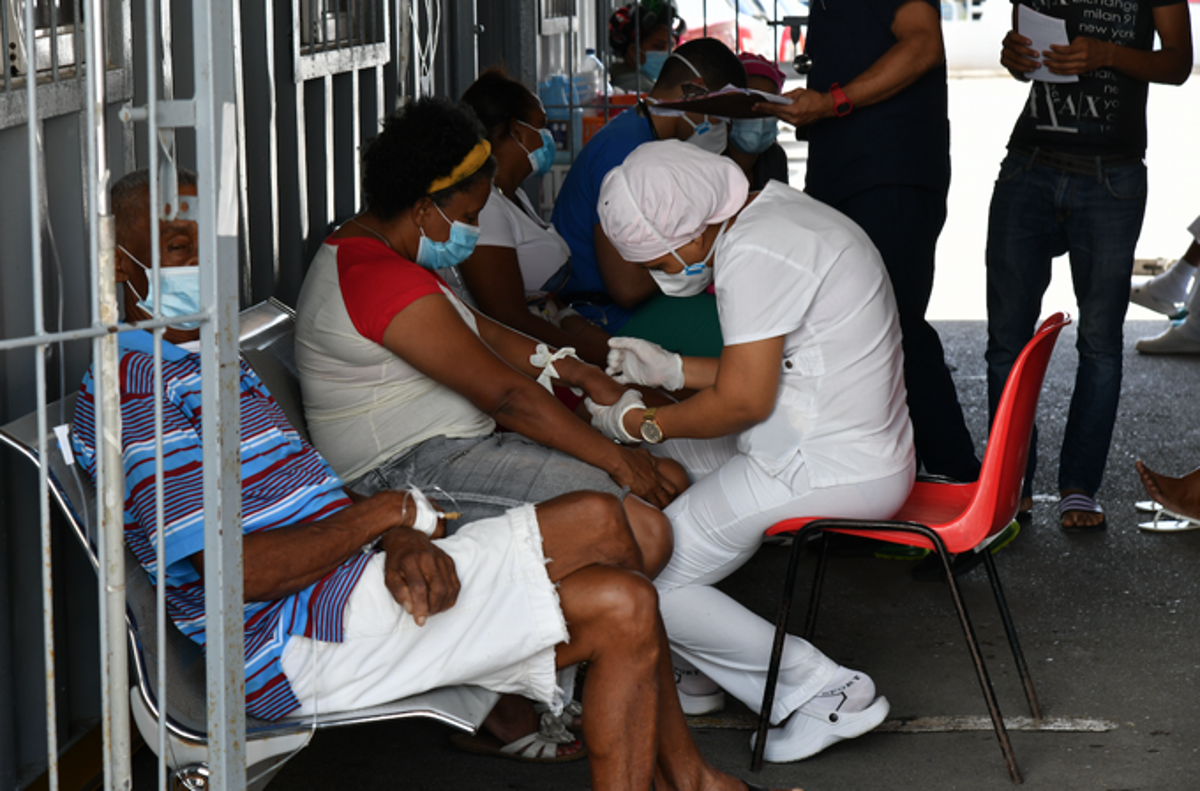 The Government maintains constant calls to the population to be inoculated and avoid entering into risks of infections and deaths from the virus. / DAILY LIST

While the gatherings of crowds and lack of physical distancing are becoming more and more present in the country, the contagions due to the Covid-19 virus continue to increase, with daily records of around 1,000 cases, with more than 13,000 new positive cases reported so far this month.

Amid this reality, the calls for vaccination against the deadly virus arouse less and less enthusiasm in the population, reaching 5.4 million people with two doses so far, out of a target of 7.5 million people over 18 years of age.

The massive presence of people and the lack of physical distancing is becoming more and more common in public places, especially on weekends, especially in shopping malls and recreation and amusement centers, many of which have also been reducing the requirement to show the vaccination card.

Positivity is around 15%.
Active positivity continues to be recorded in the country in recent weeks, resulting yesterday in about 15 new positive cases out of every 100 laboratory samples processed.

Yesterday, the country registered 1,160 new positive Covid-19 cases, out of a total of 13,678 laboratory samples processed, with Greater Santo Domingo maintaining the lead in the number of new infections, followed by Puerto Plata and Santiago.

Yesterday, the system did not report any new cases of death, so the death figures remain at 4,170 from March 2020 to date.

The data contained in the epidemiological bulletin number 606 issued yesterday indicates that the positivity of the last four weeks is 10.65% and to date, the active cases of the virus captured by the system are 4,769.

29,000 samples
The Ministry of Public Health reported that the demand for SARS CoV-2 testing has increased, and over the weekend 29,078 samples were processed, of which 13,678 were processed in the last 24 hours.

Of the critical patients, 155 were connected to ventilation yesterday.

Of the risk groups, the system has registered to date, 1,469 pregnant women; 1,627 health care workers, and 43,069 children under 20 years of age have been affected by the virus.

5.5 million with two doses.
Although a little more than a month ago about half a million people completed their two-dose vaccination schedule, in the last weeks the demand for vaccines has been reduced at the vaccination posts, after the reactivation of the vaccination process during the first weeks after the official disposition that established the obligation to show the vaccination card to enter public places, issued last October 8, effective as of October 18.

0 0 votes
Article Rating
3 Comments
Oldest
Newest Most Voted
Inline Feedbacks
View all comments
Where there is a will...

I am not sure who writes these headlines, but the sensationalism has to stop. And this coming from a 4x vaccinated person!

Same narrative being pushed in Canada and the USA. The “vaccine” is the issue here. PCR tests are proven to be faulty. I love how many in the DR know what is up from the Globalists trying to dismantle their freedoms!

At least some Dominicans have decent critical thinking skills.

The vaxxxers don’t work, they do NOT stop any spread-just look around the world at the most vaxxxed countries that are having massive “spikes.”

There is evidence the vaxxxes don’t prevent worse cases, based on the same countries where the vaxxxed are the ones in hospitals and dying.

The vaxxxes destroy immune systems, based on clinical evidence that the vaxxxed have NEGATIVE immunity shortly after a booster.

Dominicans are seeing the same things that others around the planet see, at least the ones who refuse to comply with gubmint vaxxx mandates.

Fact is this “pandemic” was *never* about a virus. It was ALL about gubmint control of populations vis-a-vis “The Great Reset.”

I suspect that we will begin seeing a cause-effect that the most a country is vaxxxed, the more unexplained incremental deaths we will see. I say this because the earliest vaxxxed country, the UK, is already seeing excess non-covid deaths which they cannot adequately explain.

I see that sheeple thing covid is a “respiratory disease.” This just shows ignorance. Covid is a circulatory disease, destroying epithelial cells in arteries and veins, causing lowered circulation. It may manifest itself in lung issues, with symptoms similar to CHF…because the O2/CO2 bridges are clogged with microclots, not allowing gaseous exchange, resulting in lowered SaO2 levels, causing all manner of organ failures, especially in those who already are health-compromised. The vaxxxes make the circulatory issues even worse by causing cells to create the spike proteins…that migrate to every organ in the body—contrary to what we were told—clogging up the circulatory systems even in healthy people. There is evidence everywhere for this fact, even if globalist propagandists tools in the MSM refuse to report the facts.

Don’t believe me? Search “died suddenly” on a non-google search engine (like, for instance, duckduckgo) and look at the massive number of young, healthy people who are literally dropping dead, including several dozen professional athletes!

Until The Normals start pushing back, calling out bullspit on the collaborators of this thing, the world will get much, much worse, loss of freedom and liberty (helllloooo, DR mandates), and unexplained deaths increasing. It’s all happening right before our eyes! Look around!

We are witnessing real evil creep into the lives of Free Men everywhere. We have a macabre front row seat to The Great Reset, the ultimate end game of this scamdemic.