Juanita, the manatee, makes it to Ozama River 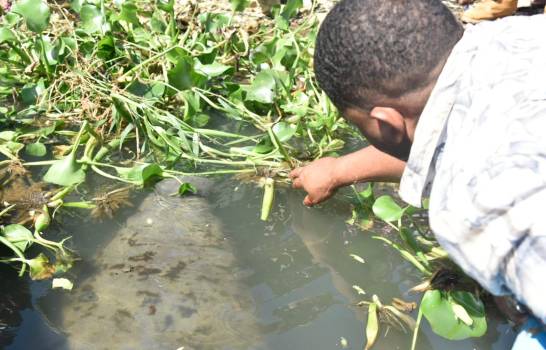 The manatee Juanita arrived this Tuesday morning in the waters of the Ozama River, just behind the Dominican Republic Navy. Officials from the National Environmental Protection Service (SENPA) were on the scene.

Dozens of people looked out to pet the manatee, which experts do not recommend, especially because they could dislodge its tracker.

On June 27th of this year, three manatees Juanita, Pepe, and Lupita were released. This project, led by the Ministry of Environment, the National Aquarium, and Fundemar, marked a milestone in the conservation of the Antillean manatee, a critically endangered species.

Juanita, which had remained most of the time in Rio Salado and on the coast near Bayahibe, had surprised trackers by undertaking a long trip in a westerly direction a little more than a week ago.

She had covered 84 linear kilometers from Bayahibe, making several stops in the most important rivers of the area, the Cumayasa, Higuamo, and Soco. Fundemar, who monitor the animals, became concerned when they received a video of Juanita without her tracker. Losing Juanita’s location would make monitoring almost impossible.

One person at Soco pulled the animal’s tracker off, innocently thinking it was a foreign object that had become entangled in her tail, and decided to help her, he told Fundemar.

The Ministry of Environment, Senpa, and the Navy combined with Rita Sellares and Rachel Plekaniec of Fundemar, to search for Juana in the Soco River for two days without success. The idea was to try to put the tracker back on her.

The spirits dropped as the hours passed and Juana was lost in the vicinity of the Soco River.

On Monday, the persons in charge of the monitoring received a call and a video from Juan Dolio, where Juana was seen near the beach, members of the Cestur and the Navy alerted of the presence of the traveler while they gave follow-up and protection, as they had done during Juana’s crossing from Bayahibe.

In the Dominican Republic, the manatee conservation effort is sponsored by the Ministry of Environment, the National Aquarium, and the Fundemar foundation. The species is in danger of extinction. The three named manatees have created a new awareness in Dominicans that now are more likely to protect the manatees.