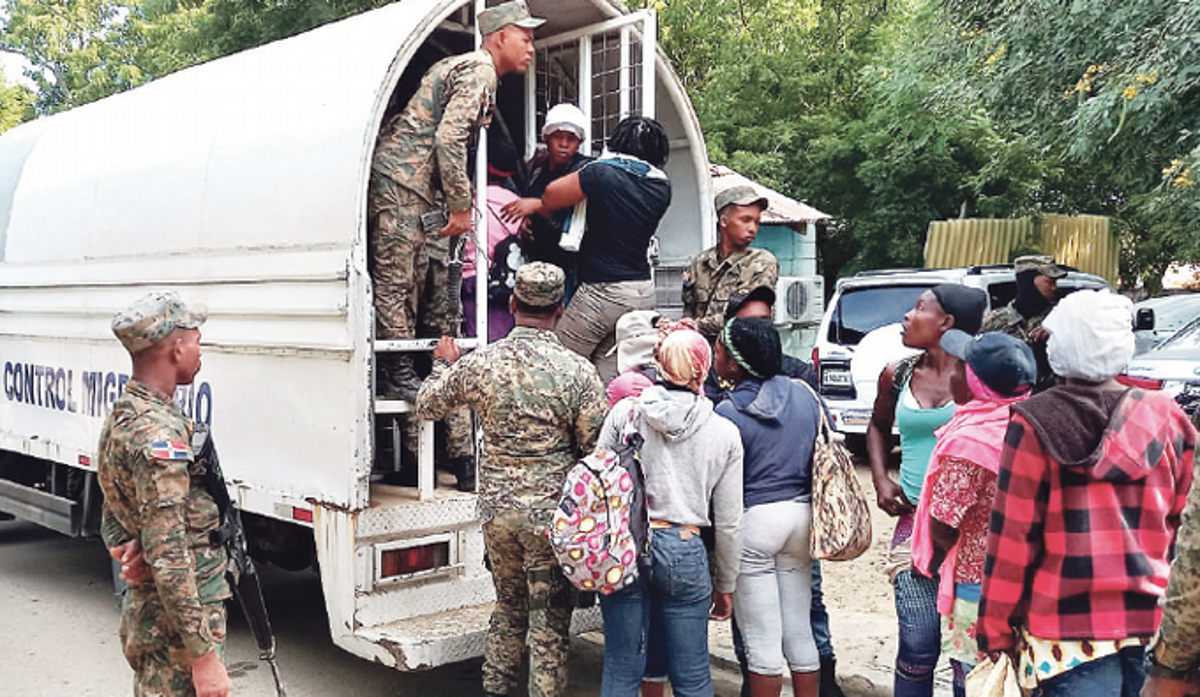 Military forces mount illegal Haitians in a unit of the Migration Control Service, after their capture in border towns, for their repatriation to Haiti.

The Haitian Calixto Paul said that between 2016 and 2017, he was arrested seven times and returned to his country along with other compatriots.

For more than 20 years, Haitians played “cat and mouse” with the military and immigration inspectors who detained them to return them to their country after entering Dominican territory irregularly. Still, now they complain that things stop; they “are getting very difficult.”

Haitians were detained in operations carried out in the four Northwest provinces, and Santiago tried to cross the border again. Still, the military persecutes them, arrests them, and hands them over to Migration, which then repatriates them.

“This is getting uglier and uglier,” they say, “The guards grab us, hand us over to the Migra (Migration) and when we try to re-enter Dominican territory again. they arrest us,” complained Calixto Paul, one of those returned to his territory, who was waiting with others for the process to be re-entered to Haiti.

Paul said that between 2016 and 2017, he was arrested seven times and returned to his country along with at least other of his compatriots, but that they managed to return to the Dominican Republic.

However, he said that when he was arrested in El Pocito, in the province of Montecisti, ten days ago, together with other Haitians, he tried to enter this country, but that members of the Army frustrated his attempts.

“This time, it seems that bad luck accompanied me, how ugly this is,” he lamented.

Other Haitians said that the soldiers are hiding under the shadows of the heaths in the Northwest mountains and that they are chasing them on motorcycles and foot, catching them and returning them.

No mistreatment
Renso Roulet, another of the Haitians arrested yesterday after trying again to enter the Dominican Republic using the northern border of Dajabón, added that the guards treat them well when they are arrested.

“Years ago yes, not now, they catch us prisoners, they take us to the Dajabón fortress, then to the Migra, (Migration Directorate) and they return us, but no abuse, if while waiting we ask that we want to go to the bathroom, they allow it,” he commented.

Operations
The commander of the Fourth Brigade of the Dominican Republic Army based in Mao, Colonel Germán Rosario Pérez, informed Listín Diario that the operations to detain Haitians who cross the border irregularly continue and will not stop.

He said that this was done by Major General Julio Ernesto Florián Pérez, following the instructions of the Minister of Defense, Lieutenant General Carlos Luciano Díaz Morfa.

Difficult situation
The Haitian sociologist residing in Santiago, George Bisoneaux, a former professor at the State University of Haiti, declared to Listín Diario that what is happening in his country is an unfortunate and daunting situation.

In that order, he said that Haiti is currently shaken by gangs that commit kidnappings for ransom, armed robberies in the streets, looting of commercial establishments, even though now there is a slight relief.

The lack of food, inflation, unemployment, precarious public services, and other ills are added to this.

Better the cat …than the mouse!