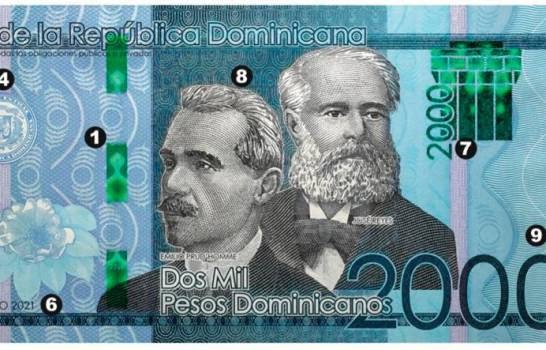 The Central Bank of the Dominican Republic (BCRD) announced that as of December 1, a 2,000 Dominican peso banknote, series 2021, whose production was ordered through an international public bidding process in January of this year, began circulation, with the same characteristics of the banknote with the same value in circulation, which will maintain its validity for the payment of all public and private obligations.

The security features consist of a combinable thread, with the isotype of the institutional visual identity; a geometric mark in relief for the blind, a watermark of the patrician Juan Pablo Duarte that can be seen when the banknote is exposed to light, the horizontal numbering of each banknote and micro-prints in letters that can be seen with a magnifying glass.

Also, the year of printing that identifies the series to which it belongs, an isotype with the visual identity of the BCRD, a latent image of small inverted lines forming an engraving with the initials “BCRD,” and the vertical numbering that must be equal to the horizontal numbering.

This banknote is issued under the provisions contained in Articles 228, 229, and 230 of the Constitution of the Dominican Republic; and Article 25, paragraphs a and c of the Monetary and Financial Law, according to a press release.

The Central Bank urges citizens to consult the information available on its website bancentral.gov.do if they have any doubts about this or any other banknote or currency, the press release adds.