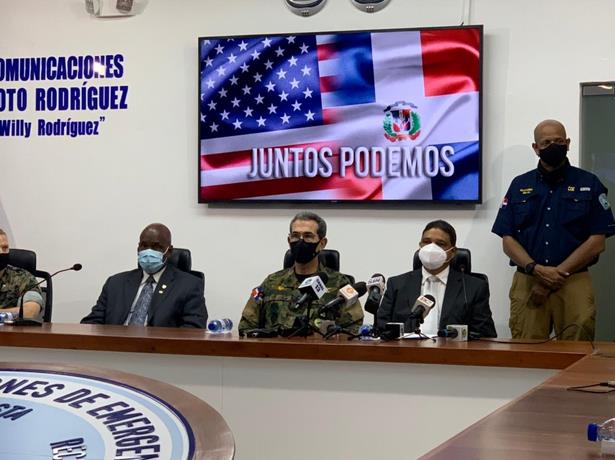 Three mobile hospitals with nine modules and a capacity for 40 stretchers, received this Friday from the Emergency Operations Center (COE) as a donation from the United States government.

The US donation joins two other units through the Southern Command. They seek to increase the capacity of the Dominican Government to offer emergency assistance during operations in response to disasters or health crises.

During a press conference, the representatives of both nations highlighted that the infrastructure has three pavilions with rapid deployment that allow attending to “any emergency in minutes” and another six that can be alternative places for
medical care for a long time.

They also pointed out that each hospital has an electrical system of two 70 KBA generators, nine air conditioners, a water system, sinks, and showers.

The director of Exercises and Coalition Affairs of the United States Southern Command, Kevin J Bostick, expressed when taking the floor that “the United States firmly believes that the collective security of our friends promotes our security.”

On his side, the director of the COE, Juan Manuel Méndez Garcia, said: that the donation “will undoubtedly strengthen inter-institutional cooperation and the spirit of brotherhood between the two peoples.”

We don’t want it ! Give it to Haiti 🇭🇹
They need it wtf you people are stupid ?? Are yu stupid ,we have hospitals don’t put them here put them in Haiti, yu put them here because you know it will work properly you need to trust Haiti and work with them

“Donate” some knowledge, how to to save lives… People are dying while waiting for ambulances… and top of they are getting lost… up to hour and a half waiting for for them to show up… disaster… fix incompetents and ineptness…

These units are great US military surplus that can be put to good use in the RD.

They are mobile and can be set up within hours of deployment. The RD would be wise to use them in areas short of local medical access. Routine schedules to various locations would be advantageous to the health well-being of the public.

Why not build real ones

No question real hospitals are needed.

The mobile hospitals are real hospitals donated no cost to the RD. The burden of building a real hospital of traditional brick and motor hospital is enormous cost, providing furnishings & equipment, and acquiring full time staffing for the many that are needed throughout the country.

The mobile hospitals can be routinely sent to where they are vital. They are not locked in place. Their facilities and staff can get to attend to the urgent medical demands of disadvantaged populations throughout the country and provide guidance for patient follow up care at home or make referrals to other facilities before moving on to their next task site. The benefit of the three mobile hospitals is they only require staffing, logistic support, supplying, and funding for the three.