A little light, something to eat … and that’s enough 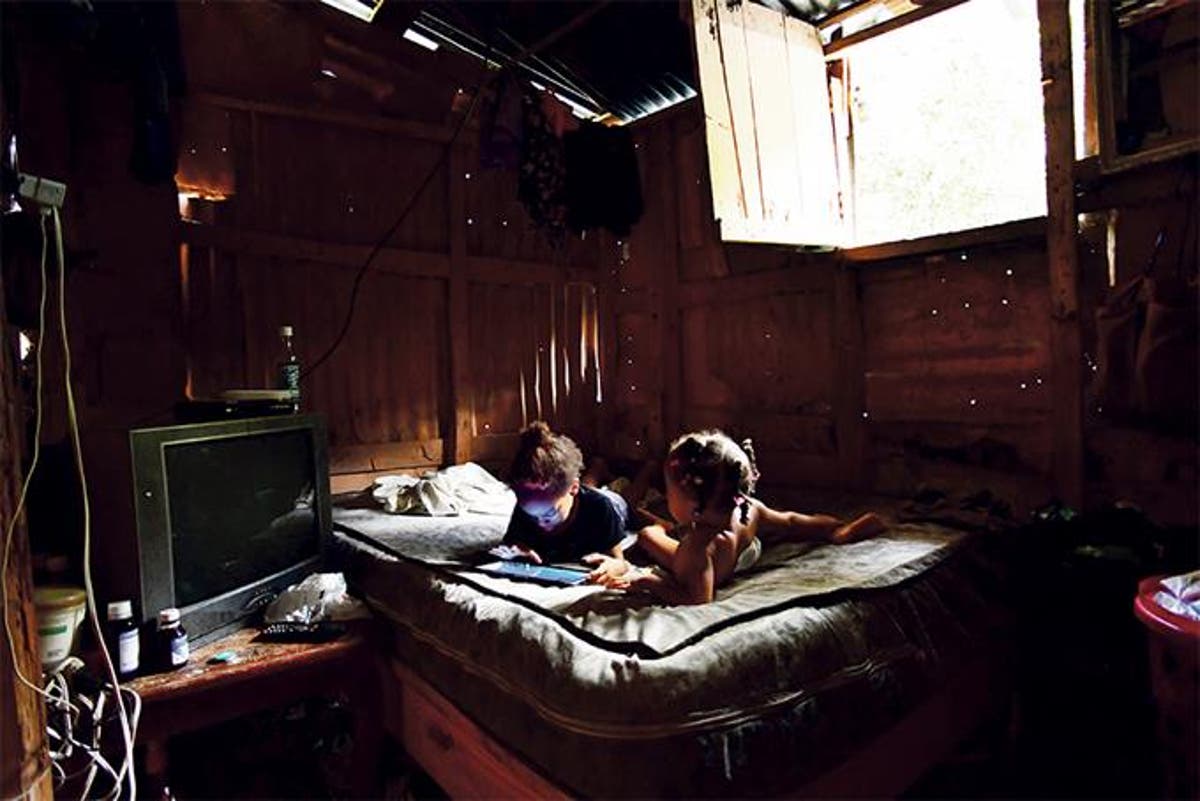 The family of Fior Daliza Valdez awaits Christmas Eve in the Diómedes ravine, as they have lived throughout the year, in the midst of economic precariousness. RAUL ASENCIO

Hope. The humble family of Fior Daliza, Alejandro, and their three children are waiting for a helping hand to share Christmas Eve dinner.

A few small Christmas lights may not be able to dispel the hardships and needs woven around and inside the zinc walls that protect the family of Fior Daliza Valdez, in the Diómedes gully, a sort of border between the 27 de Febrero sector and Guachupita, from the elements.

However, light bulbs and two dolls are all that Natacha and Victoria, her daughter and niece, are waiting to light up the house with their smiles and laughter during the holidays.

Meanwhile, Natacha, Victoria, and Jonathan, the latter the second son, make do with the few rays of light that filter through the zinc sheets and that, in the darkness of the only room in the house, look like stars that wake them up in the morning and only disappear when the sun goes down.

“They run to the neighbors as soon as they see the lights at night,” said the 29-year-old mother, who spends her days waiting for a helping hand to knock on her door with food for her little ones.

On the ‘pelao’ (shabby, ragged) mattress, used to sleep by the four members of this family and sometimes joined by Victoria, the niece, rests the innocence of the little ones of two, five, and seven years old who spend their days tossing and turning in bed and running around on the rustic floor, ignoring the economic difficulties faced by their parents and for which they have had to spend entire days without anything but water.

“There are times when we go for days without eating, once we went for three days, look, it’s not easy,” said Fior, while she followed with her eyes every step Jonathan, the second of her children and in whom they invest every peso they get to buy the medicines that prevent the little one from having convulsions.

A special needs child
At seven years old, Jonathan has not been able to speak due to the scarcity of resources that prevent his parents from paying for the speech therapy indicated by the doctors who follow up on his case. Still, even so, he has won the affection of his neighbors, siblings, and Victoria.

“Come Jonathan, not that way,” his little cousin coaxes him, who, although younger than him in age and height, with hugs and tickles, manages to keep him from leaving the house or playing with items in the place that could hurt him.

Fior said that the little boy “was born as a vegetable; he didn’t move or eat,” and during his first years, he received care at the Dr. Robert Reid Cabral Children’s Hospital and the National Institute of Integral Attention to Early Childhood (Inaipi). In these places, he could stand up and walk on his own.

The time Jonathan spent at Inaipi not only gave Fior the joy of seeing her child progress, but she also took advantage of those hours to make “picaditas” (mincemeat snacks) and help her husband, Alejandro Brito, with household expenses.

And although Jonathan’s health condition improved, he also grew up, and when he reached six years of age, he outgrew the institute.

“He could only be there until he was five years old, then they took him out,” explained Fior, while pointing out that since no one can take care of him while she does “little jobs,” she dedicates herself to taking care of her two children.

Sacrifice
Besides Jonathan and Natacha, Fior and Alejandro also have Joel Manuel, who does not live with them due to lack of space.

The nine-year-old boy stays with his grandmother, who works in cleaning public spaces of the National District City Hall.

At a young age, Joel Manuel showed signs of sacrifice for his family because his mother’s television only works sometimes, and “if it is cold or raining, we have to take it out to warm up in the sun,” he gave his tablet to his siblings so that while he goes to school, they can entertain themselves.

The boy received the electronic equipment to join his classmates in leaving behind pencil and paper-based learning, but because of his siblings, he preferred to postpone his opportunity to learn with the new technologies.

On the other hand, in the more than ten years that the family has lived in the area, they have always had the support of their neighbors.

In the little or much that Alejandro achieves daily, the hope of this family rests to see on their table some food that would allow them to share a decent dinner on Christmas Eve.

“If we get something, we have a little dinner there (pointing to the table stove cornered next to a small gas tank) or if not, we spend it here quietly as in other years,” said Fior.

This is the season to share, as is all time of the year. If you have, help those who don’t have.