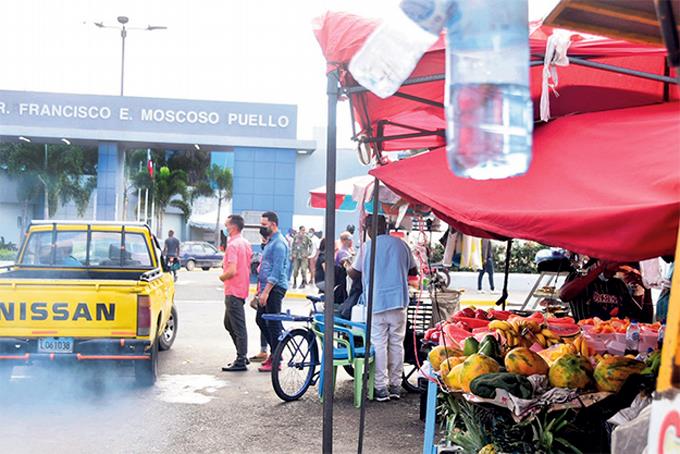 The surrounding areas of the Luis Eduardo Aybar and Francisco Moscoso Puello hospitals in the capital city reflect an atmosphere of disorganization that rattles the tranquility of the citizens who go to these centers for medical attention.

A month ago, a report by Listin Diario presented in detail the state of slum conditions in the surroundings of these health centers.

Noise, garbage, erratic parking, food sales, clothes, and knick-knacks in the surrounding streets are chaotic situations that aggravate the atmosphere of disorder in these hospital zones.

Likewise, the sidewalks continue to be the stage for hawkers, motorcyclists, badly parked vehicles, and piles of garbage. As a result, walking in the area could be a bitter pill for the passerby since the access roads to the health centers are still obstructed.

The chaos is even worse at the Luis Eduardo Aybar Hospital. In addition to the informal businesses and the accumulation of garbage, there is a lack of signage and traffic jams in the parallel streets, generating noise, annoyance, and pollution for the patients. This area will house the Ciudad Sanitaria project, the country’s largest and most advanced hospital complex. This center, which is about to open its doors, was built with a budget of 15 billion pesos. Patients and neighbors of these areas are clamoring for the authorities to intervene because they consider the slums in these areas to be unsustainable.

Response of the Mayor’s Office
Regarding the complaints of residents of the sectors surrounding the hospitals, who complain about the frequent obstructions of the access roads to the health centers due to peddlers, street vendors, and informal businesses that occupy the sidewalks and generate chaos in the surroundings, the general secretary of the Mayor’s Office of the National District, Hugo Beras, announced that they are aware of the situation and that the mayor, Carolina Mejía is currently looking for solutions to the problem.

Complaints.
Despite complaints and responses from the National District council, the Luis Eduardo Aybar and Moscoso Puello hospitals’ areas still stand out for their deplorable conditions.

No improvement.
However, despite this response from the city council, four weeks later, the situation of the hospital surroundings has not improved and shows no signs of intervention by the authorities.