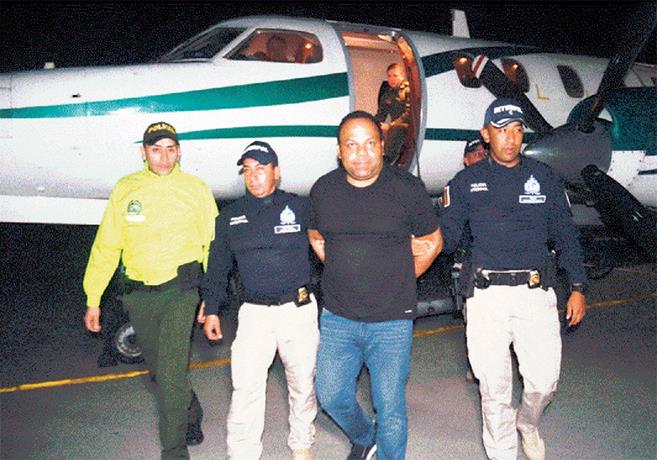 César Emilio Peralta (El Abusador) is already in the hands of the United States authorities, sent from Colombia.

Charges. Since June 2019, he has been on the run due to a history of drug trafficking in the country and the United States.

The United States authorities confirmed yesterday the extradition of César Emilio Peralta (“César The Abuser”), from Colombia to Puerto Rico, to face drug trafficking charges presented in the Judicial District of Puerto Rico.

“This arrest and extradition underscores the collaboration and cooperation among our law enforcement partners, as well as our commitment and resolve to combat transnational organized crime,” said U.S. Attorney W. Stephen Muldrow.

In a press release, the Attorney General of Puerto Rico added that the U.S. authorities will continue to maximize their efforts to “bring to justice those who ignore our laws and smuggle drugs in Puerto Rico and the continental United States.”

Accused of bringing cocaine to Puerto Rico
At the end of November 2018, a Federal Grand Jury in the District of Puerto Rico charged Peralta with conspiracy to import heroin and cocaine into the United States and with the distribution of five kilograms or more of cocaine for illegal importation into that country, and faces a possible sentence of 10 years to life imprisonment, if the charges are confirmed.

The Attorney General designated Peralta as a Consolidated Priority Organizational Objective in 2017, among the leaders who exercise “command and control” of drug trafficking and money laundering with the most significant impact on the supply of illicit drugs to the United States, being one of the most sought after by the authorities.

Drug trafficking leader
Peralta was the leader of a transnational criminal organization based in the Dominican Republic and coordinated, according to the authorities’ accusations, the shipment of several tons of cocaine from Colombia and Venezuela, which were later transported to Puerto Rico and the United States.

Peralta was extradited early this Wednesday to Puerto Rico from Colombia, where he had been in La Picota prison since the end of December 2019.

Upon his arrival, he will be informed of a hearing for the formulation of charges, and a press conference is planned at 2:00 in the afternoon, in which the U.S. authorities will give more details of the case against him.

The announcement of his extradition to Puerto Rico was on May 20, when his lawyer, Dr. Joaquín Pérez, indicated that the process could take longer than expected because it had to be approved by the Supreme Court of Colombia.

“El Abusador,” designated as the head of an international drug trafficking network and “one of the most powerful men in drug trafficking in the Dominican Republic,” is in prison on conspiracy charges to import drugs into the United States and money laundering.

Iván Duque handed it over
On October 14, the Colombian president, Iván Duque, signed the extradition.

In Puerto Rico, “El Abusador” will await the trial and will later be transferred to U.S. soil, where he has been required since April 2019 by the Judicial District of South Florida.

He fled the country
“El Abusador” fled the Dominican and American justice from August 20 to December 2, 2019, when he was trapped in room 1104 of the Murano Elite hotel, in the exclusive Boca Grande sector, in Cartagena de Indias.

Made wavesAs of June 9, 2019, Peralta made waves when former Major League Baseball player David Ortiz was shot at in the Ozama Ensanche, and he appeared on the scene.

Hope it will be a long time before he experiences the free light of day.