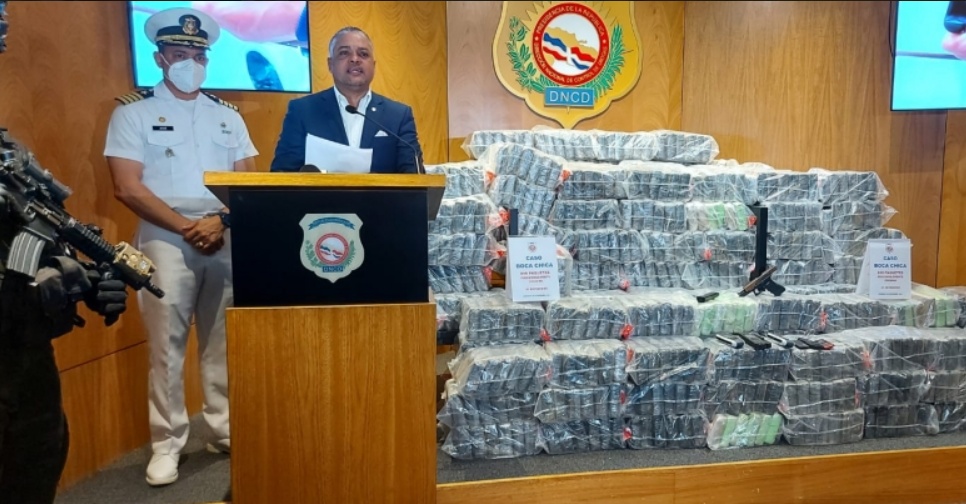 Santo Domingo.– The National Drugs Control Agency (DNCD) seized some 850 packages, presumably of cocaine, during an operation carried out on the shores of the Boca Chica municipality, Santo Domingo province.

According to a press release, members of the DNCD and military personnel intercepted the 25-foot-long speedboat, without name or registration, when its occupants tried to introduce the drug into Dominican territory from South America.

“After receiving an alert, the tactical and reaction teams mobilized along the entire coastline, managing to apprehend two Dominicans and a Venezuelan, near the entrance to the Valiente sector, Santo Domingo Este municipality, with 30 bales containing the 850 packages of the substance,” the document pointed out.

In the operation, carried out in conjunction with the Public Ministry and the Navy, nine cigars were also seized of a vegetable that appears to be marijuana, a Glock brand pistol, caliber nine millimeters, with capsules, two outboard motors, 14 fuel jugs, two life jackets, a satellite phone, a GPS, two cell phones and other evidence.

“The detainees, who will be identified eventually, are at the disposal of the Public Ministry for the corresponding purposes,” the press release added.

Excellent! Continue with the good work!

It appears the cleaning up of government under the Abinader leadership is bearing the fruit of more busts of drug traffickers.

Alert Alert Alert DT Someone is using my identity and made a false post under my name.

What a shame. What will I sniff now?”

Stop hiding your true intentions with our country. I’m sure america has all the drugs and prostitution you need.