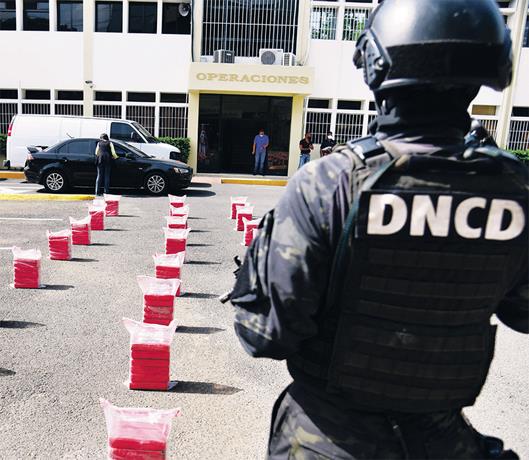 The National Drug Control Directorate (DNCD) indicated that more than 25,300 kilograms of different drugs had been seized during the operations carried out throughout this year.

Through a press conference held at the headquarters of his institution, Carlos Devers, spokesman for the entity, indicated that in a consolidated manner and with the cooperation of local authorities, another 5,661 kilograms of cocaine had been seized at the international level, marijuana, crack, ecstasy and other substances.

According to the statistics that are registered almost at the end of the year, some 20 thousand people have been arrested for violating the drug law, 93 percent are Dominican, and seven percent are foreigners.

During this period, 196 firearms of different calibers, 2,512 vehicles, more than two million dollars, and 42 million pesos were seized.

This year, as part of the agreements and the strengthening of international cooperation, 74 Dominicans have been extradited for various crimes, the majority to the United States and Puerto Rico.

In that same press conference, they classified the figure as “unprecedented” in the institution’s history.

In Boca Chica
The last operations were carried out on the shores of the Boca Chica municipality, Santo Domingo province, where some 850 packages, presumably of cocaine, were seized.

According to a press release, members of the DNCD and military personnel intercepted the occupants of a 25-foot-long speedboat, with no name or registration, when they tried to introduce the cargo into Dominican territory from South America.

“After receiving an alert, the tactical and reaction teams mobilized throughout the coastline, managing to arrest two Dominicans and one Venezuelan, near the entrance to the Valiente sector, Santo Domingo Este municipality, with 30 bales, containing 850 packages of the substance,” says the document.

Anything else
The operation also seized nine cigars of a vegetable that appears to be marijuana, a 9-millimeter Glock pistol with a magazine, and several cartridges.

Other objects
The Public Ministry and the Navy confiscated two outboard motors, 14 fuel jugs, two life jackets, a satellite phone, a GPS, two cell phones, and other evidence in the operation.