Passengers are affected after flight cancellation 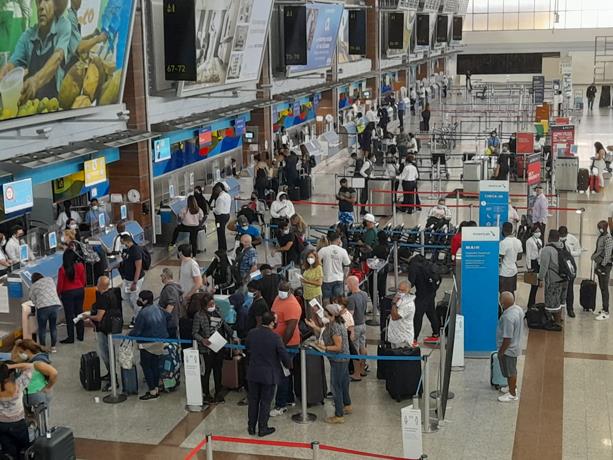 An average of 1,600 passengers were affected last Saturday with the cancellations of some 20 commercial flights to and from the country to and from different destinations due to the lack of crew personnel from international airlines, affected by the new omicron variant of the coronavirus, which has wreaked havoc on commercial aviation inside and outside the United States.

This Sunday, however, flight operations to and from the United States and other destinations were normalized by the Las Américas International Airport, José Francisco Peña Gómez. After the airlines looking for new alternatives to continue with their operations.

A manager of one of the airlines, who preferred that his name be kept anonymous, explained that an estimated 1,500 to 1,600 passengers were affected by the cancellations of flights last Saturday at the Las Américas terminal, José Francisco Peña Gómez.

In the same order, he pointed out that last Saturday, the airlines covered the costs of transportation and lodging in hotels near the airport for travelers who could not travel so that they could be placed on waiting lists and left on the first flights from this Sunday to your destination.

He added that airlines have had to turn to their reservation employees to replace those at home infected with the new omicron variant.

In addition, he explained that according to experts’ opinions on the matter, it is believed that airline crew employees would have been infected with the virus while working inside the aircraft.

The Ministry of Public Health also announced that the new variant of Covid-19, omicron, is already circulating in the Dominican Republic.

While the flow of absent Dominican passengers living in the cities of the United States continues to flow to the country to enjoy the New Year holidays with their families.

It is recalled that for the week that just ended, the airport authorities had announced the arrival on the occasion of Christmas of more than 1000 commercial flights through the terminals of Las Américas and Punta Cana to the country.

The cancellations of some twenty round-trip operations last Saturday caused dozens of Dominican and foreign travelers stranded at the airport despite having their reservations previously made in the airline’s computerized systems.

For his part, the Director of Communications of Airports Dominicanos XXI (Aerodom), Luis López, clarified that the flights were normalized this Sunday. In addition, there had been no cancellation on the airlines even though they work with limited personnel.

López said that although there has been no cancellation of operations, there have been delays in the departure and arrival of some flights from the United States and other destinations.

The Aerodom executive stressed that the concession company is offering all possible facilities to the airlines in the face of the situation due to the omicron crisis.

According to the details, the service personnel on board some airlines have been more impacted by the new variant of the coronavirus attacks than other air transport companies in the United States.

In addition, the lack of airline crew personnel also created last Saturday delays in the departure and arrival of at least four operations of flights scheduled by JetBlue airlines to New York, Spirit Airlines to Orlando, Florida, Air France to Paris, France and JetBlue to New York in operation from AILA.

Meanwhile, the special flights contracted by the government to facilitate the transfer of absent Dominicans to the country during Christmas continue to be carried out without setbacks.

The airline Air Century is making several daily flights from the John F. Kennedy airport, in New York City, to the international airports of Las Américas, Santo Domingo, and Cibao, in Santiago de los Caballeros, bringing hundreds of nationals to the country.

The president of the Air Century airline, Omar Chahin, explained that the special flights contracted by the government had not suffered any cancellation or significant delays due to the situation of the Covid-19 omicron variant.

Air Century operates the flights with negotiation agreements with Sky Cana, which owns the aircraft. It does not have the operating permits to fly to the United States.

On the other hand, Air Century does have the authorization to operate them. Luis Abinader’s government hired two airlines to make 22 flights at the cost of $ 500 with taxes included so that the absent Dominicans could travel to the country this Christmas to visit their relatives.