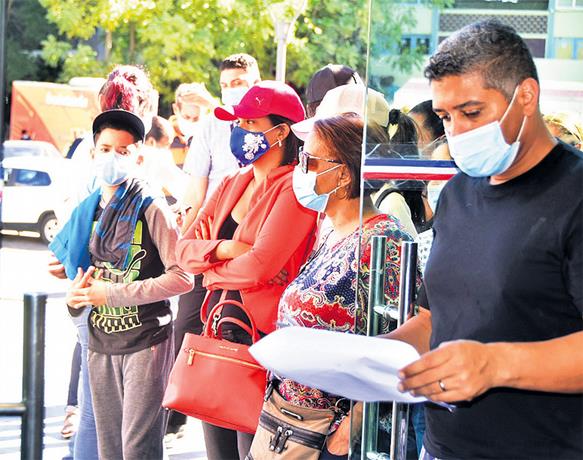 Yesterday there was an increase in all indicators of the coronavirus.

The country registered one of its highest levels of daily positivity yesterday, reaching nearly 30% of the samples processed. In comparison, the National District and the province of Santo Domingo are where it is easiest to contract the virus since they have 70% of the active cases registered by epidemiological surveillance.

Meanwhile, every day the list of collaborators of institutions and companies of the public and private sector who stop going to work as a result of the virus is increasing, registering cases of offices or departments in which more than half and sometimes all their members have been infected by the virus, according to reports received by Listín Diario.

Yesterday, the epidemiological reports showed increases in all the indicators of the virus, in comparison with the previous week, among them the positivity of four weeks, the incidence of seven days which went from 7.63 per 100 thousand inhabitants to 10.45, and the rate of transmissibility, which reached 3.44, which indicates that each infected person is transmitting the virus to about four more persons.

During the third wave, the transmissibility rate was 2.40, and in previous waves, it was 2.8.

Epidemiological bulletin number 650, issued yesterday, indicates that in the last 24 hours, 5,858 laboratory samples were processed, of which 911 were positive.

In addition, three new deaths were reported, bringing the number of people who died from the disease to 4,246, with a lethality rate of 1.02 percent.

The daily positivity stood yesterday at 29.33% and that of the last four weeks at 5.15%, both with a tendency to continue increasing.

66
On ventilators
Out of 469 ventilators in the system, 66 people were connected yesterday to assisted respiration for a 14 percent occupancy rate.

Vulnerable groups
Risk groups continue to be in people with comorbidities such as hypertension, diabetes, and obesity.

So basically the number of people in the hospitals are dropping from 19% to 13% and the death rate is dropping also from 1.03% to 1.02%. Those are the numbers that should matters and not the daily positivity rate.

Alfredo, at this point fear is not the enemy; Stupidity is! What we are dealing with is a failure for certain people to see through all of the complete B S propaganda spewed DAILY by every fake-news outlet on the planet. They spread confusion, which you and I can handle easily, but others cannot. This plan-demic will continue as long as the idiots of the world keep going along with it, or until governments change hands back to more responsible, less corrupt individuals.

So what exactly is the vaccine for if millions get it and the cases keep coming back again and again? If using vaccines and masks all the time does nothing, why are we still using them? 🤔

Almost all serious cases are unvaccinated people, Vaccinated cases are generally less than 1% of cases in the hospital. What you would like to believe is not reality