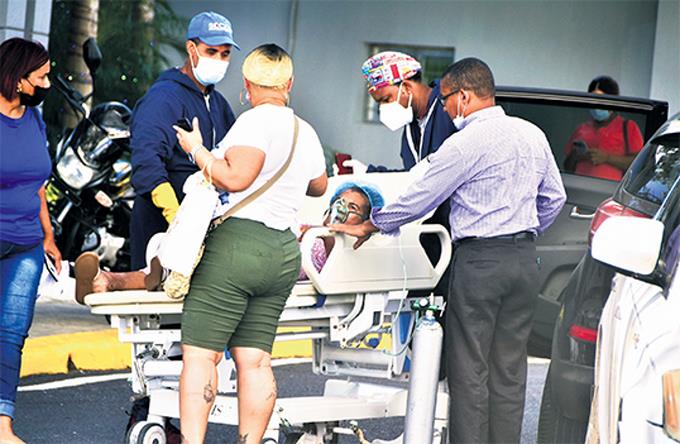 The rapid advance of the Omicron variant of Covid-19 among the Dominican population keeps the health authorities at high levels of concern. Yesterday they put the whole country under epidemiological alert, emphasizing the National District and the provinces of Santo Domingo, Santiago, and San Cristobal, where the highest number of infections are.

The main recommendation made to the population is not to participate in mass or social activities; that family gatherings at the end of the year should only take place among vaccinated people; to avoid close contact with people suffering from respiratory diseases or flu infections and the proper use of masks, making sure they are well adjusted.

In addition, it is recommended to complete the third dose vaccination schedule; use good hygiene; go to the doctor at the first symptoms, reduce to 50% the number of people in stadiums and closed places, and keep a physical distance.

The epidemiological alert was issued yesterday during a press conference headed by minister Daniel Rivera; vice minister Eladio Pérez, and the director of Epidemiology, Ronald Skewes, who on several occasions warned that the behavior of the virus is of concern and that a more significant increase of contagions is expected in the next few days.

They revealed that as a result of the circulation of the Omicron variant in the last week, the transmissibility rate reached the highest levels in the country, reaching 3.44, which indicates that each infected person is transmitting the virus to about four more people.

Delta 59% and Omicron at 41%.
The Omicron variant of Covid-19, whose circulation was reported in Dominican territory a week ago, was detected in 41% of the 509 samples sequenced in the country. On the other hand, the Delta variant predominates with 59% of the samples studied.

The samples analyzed at the Dr. Defilló National Laboratory were taken from the 14th to the 27th of this month, being the National District, Santo Domingo, San Cristóbal, and Santiago, where the highest number of cases of the Omicron and Delta variants were detected, with 299 and 210 cases, respectively.

Delta is most active in Santo Domingo and Santiago
However, the epidemiology director warned that the Omicron “is gaining ground because of its ease of transmission and it is the places with the highest population density that contribute most to the spread of the virus.” Hence, he recommended avoiding being in places where there are many people.

“Public Health is observing with concern the increase in cases that has occurred in the last week, only the National District presented between week 50 and 51 an increase of 170 infections, 37 in Santo Domingo and in San Cristobal about 35,” said Skewes.

Minister: vaccines and sufficient tests
Likewise, the Minister of Public Health affirmed that the country has enough doses of vaccines against Covid-19 to continue with the plan initiated in February of this year and PCR and antigen laboratory tests for the diagnosis and tracking of the virus in the population.

“We have enough Sinovac (…), remember that we had a total of about four million or so of Sinovac, just a week ago we got 1,200,000 Pfizer and AstraZeneca you know we have enough,” said Minister Rivera during a press conference held in the esplanade of the ministry he heads.

He stated that none are going to expire for now and that there is no reason to worry; on the contrary, they continue to contract well, and “we had paid enough so that they can continue to arrive sufficiently.”

He explained that they requested orders for this week and early January to prevent the compounds from expiring.

He informed that there are also one million PCR tests and 500,000 antigenic tests available regarding diagnostic tests.

Vaccines for children
The head of Public Health indicated that a resolution is pending that the cabinet presided over by Vice President Raquel Peña will issue on the vaccination against Covid-19 in children.

“We can start with Sinovac and we are practically fine-tuning the negotiation, by February at the latest the children’s Pfizer may arrive,” he said, although they are waiting to finalize the details of the provision.

Moscoso Puello
The Moscoso Puello hospital has recorded 18 cases of hospitalization and four patients admitted to the Intensive Care Unit (ICU) for Covid-19.

Doctor reports
These data were provided by Dr. Zaira Hidalgo, who also stated that the Moscoso Puello Hospital is “bursting at the seams” with consultations of patients with viral symptoms. As a result, the health authorities have adopted measures to counteract the growing wave of contagions. 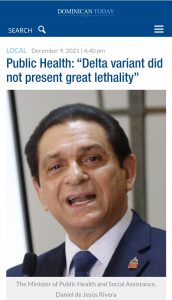