More than 23,000 Covid cases in the first week of this year 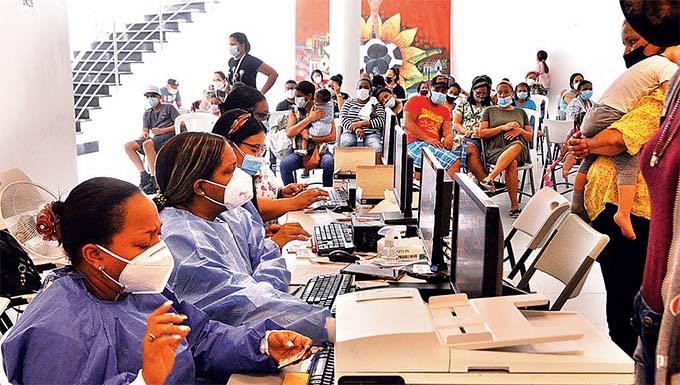 The Omicron variant of Covid-19 is the one that has caused the highest number of infections worldwide.

The first week of 2022 already has a record of 23,032 new cases of coronavirus, where every day records of infections have been established, reaching 5,968 yesterday, with an omicron variant that is already dominant in the Dominican Republic, as in other nations .

In these bulletins, six deaths were reported, accumulating 4,253 deaths in the country.

Hospitalizations
Although the authorities have said that the omicron is more contagious, but less serious, hospitalizations are increasing, as well as ventilators in use.

On the first day, the patients in normal Covid beds were 428 for a 19% occupancy and as of yesterday Public Health reported 580 admitted for 26%.

The delicate patients in Intensive Care Units (ICU) on New Year’s Day were 115 for a 20% occupancy and yesterday they were 150, equivalent to 26%.

While connected to ventilators on the first day of the year there were 74 patients, 16% of the devices in use and yesterday 101 for 22%.

When making a comparison between the first days of January of this year and those of 2021, it stands out that in the latter there were 4,533 and seven deaths.

Yesterday’s Newsletter
In the last 24 hours, 24,508 samples had been processed throughout the country, of which 12,287 were from ‘Polymerase Chain Reaction (PCR) and 12,221 antigen tests.

The provinces where there are more positive cases

The National District continues to lead the demarcation with the most infected by Covid and as of yesterday 2,161 new cases were reported. Santo Domingo province follows with 997 new cases and Santiago with 414.

Those with the fewest new cases are Pedernales with one case; Samaná with 2 and Elías Pina who only registered seven new infected.