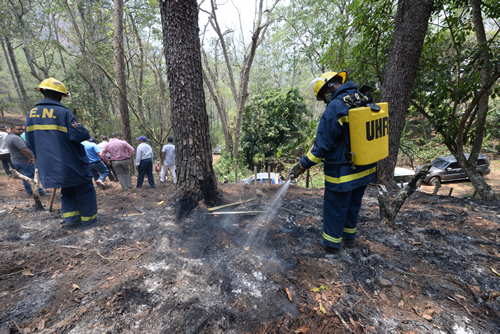 Santo Domingo.- The Ministry of the Environment reported Monday that they are fighting three forest fires in Sierra de Bahoruco National Park, where preliminary evidence show they were deliberately coordinated and provoked.

“Our main focus is to control and extinguish the fires, we are reinforcing the security of the place with a military presence, to later carry out the corresponding investigations. The full weight of the law will fall on those responsible,” a statement said.

Two days ago, fires have also been registered in the José del Carmen Ramírez and José Armando Bermúdez national parks in the provinces of San Juan de la Maguana and Santiago, respectively.

According to their latest statement issued last Saturday, the forest firefighters and park rangers, have the support of members of the National Environmental Protection Service (SENPA).

Haitians have already destroyed what they have left of most of their mountains, the remaining trees in Haiti are located in dificult access so they are coming and burning our forest for their very needed charbon, they have stoped several Haitians in the last 6 month in all our CORDILLERA CENTRAL and southwest area loaded with tons of Charcoal, we need to permantly put DRONES at night to fly our territory and fly Haitian border territory to locate by infrared the arsonists

Charcoal, wood products, furniture, pulp, cattle raising, and illegal settlement by foreigners and many others (military, investors, etc.). The Dominican flora has too many enemies and it will take an army to keep defend it. The citizenry really doesn’t care and they don’t have the energy and enthusiasm to defend the natural beauty of DR which is its forests (not the stupid buildings in STO DGO and Santiago as the uneducated celebrate as as sign of progress).
It is time for each individual to use whatever means to defend what is theirs, a natural country. Don’t just rely on the government for you to do your duty and your obligation and stop the nonsense that everything is about “me only”. Do something for the country.