Debate on how to mitigate inflation 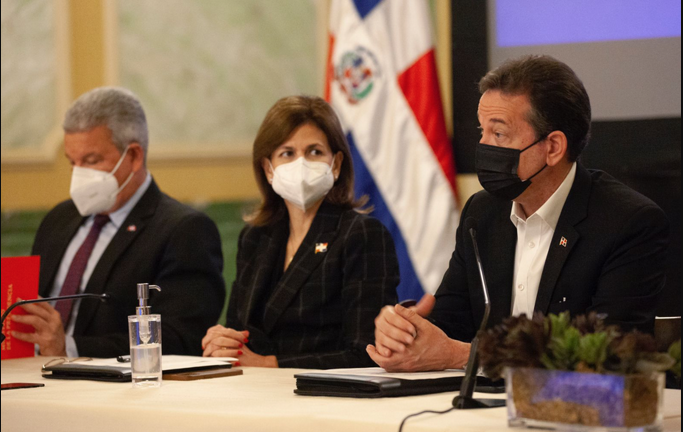 Lisandro Macarrulla, Raquel Peña and Víctor Ito Bisonó during the meeting at the National Palace. PRESIDENCY /

Vice President Raquel Peña headed a meeting yesterday with business sectors and supermarket representatives to address the issue of global inflation due to shortages that could affect imported products.

“Today we have been with importers, with producers, with traders of basic products, following up on this beginning of the year and what we are seeing is imported inflation, you see what has happened in supermarkets in the United States due to what has to do with restocking after Christmas, there is also the impact of the omicron, and that is why we met to keep a watchful eye on this situation,” said the Minister of Industry and Commerce, Víctor Ito Bisonó, who was in charge of giving the conclusions of the meeting to the members of the press.

Bisonó explained that the main thing is to “face the situation” to guarantee basic consumption to all Dominicans despite this global inflation.

“There is always a concern because we always have to pay attention, now what we have is occupation; we are taking care so that in any new situation we can face it,” added the official, who added that in this meeting there were no complaints on the part of the businessmen and merchants.

Meanwhile, the president of the National Council of Private Enterprise (Conep), Pedro Brache, said that they are working so that there is always a supply of essential products in the Dominican Republic.

The meeting lasted about an hour and a half and was held behind closed doors in the Green Room of the National Palace.

The president of the Dominican Federation of Merchants, Iván García, indicated that the cost of maritime transport had had a significant impact on inflation. He has also warned that eliminating the fuel subsidy would provoke price increases in products.

Price increases at this time can be attributed to many factors such as rising fuel costs. The public as a good sense to comprehend what is a reasonable increase and price gouging. Suggest the government augment its Pro Consumidor’s ability to seek out and charge price gougers.