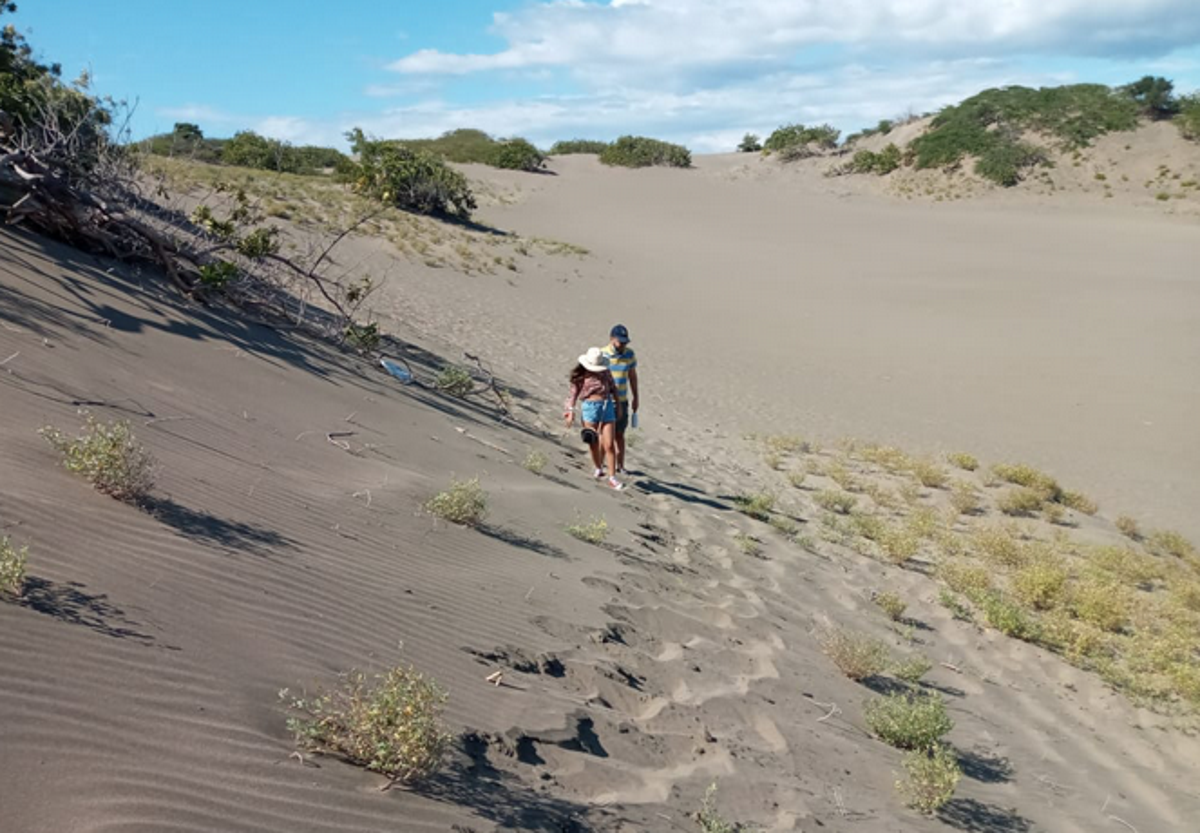 The damage to Las Dunas has been constant.

Santo Domingo, DR
A survey of different complaints of sand removal in and around Las Dunas Natural Monument in Baní has taken place in this protected area, under the direction of a technical commission of the Ministry of the Environment and Natural Resources.

As part of this day of investigation, personnel from the National Environmental Protection Service (Senpa) participated. In addition, according to details in the complaints, the sand reception and processing areas were also inspected.

Minister Orlando Jorge Mera has already explained that a team of technicians has taken steps to evaluate the affected area and has warned that, if the extraction of the material is proven, the Ministry of the Environment will bring those responsible to justice, following Law 64-00, of that agency.

“Looting, Dunes, Baní, investigation, Environment.”
The Ministry of Environment is responsible for caring for and preserving Las Dunas, extinguishing any threat that affects this area, and eliminating illegal withdrawals of sandy material.

It is also the competence of that Ministry to regulate those outside the core and buffer zone that can be carried out responsibly. On several occasions, Orlando Jorge Mera has reiterated that this type of violations and damages to the environment will be sanctioned with the full weight of Law 64-00, so the Ministry will be providing all the details about illegal extractions in areas very close to the coast of the Baní Dunes.

An ecotourism route
This area has been prioritized under the management of Jorge Mera, and the intention is to promote it as an ecotourism route so that Dominicans and foreigners can enjoy its landscapes.

Last year, the Minister of the Environment toured the area of Salinas, Calderas, the salt mine, and Punta Salinas beach, allowing him to dismantle a network of alleged owners who settled within the Dunes with authorizations from previous administrations.

The largest in the Caribbean
Las Dunas de Las Calderas Natural Monument, or Dunes of Baní, is the most extensive dune system in the insular Caribbean, whose mountains can reach up to 35 meters.

The protection of this area was initially contained in decree 233-96. It was later incorporated into the National System of Protected Areas in the General Law of Environment and Natural Resources, No. 64-00. Las Dunas has an area of 20 kilometers, with great scenic beauty. They protect the surrounding communities from hurricanes and are home to unique species adapted to these dry and saline environments.

The tour of Las Dunas is impressive, and one of its great attractions is that they are located in front of a beach of grand proportions, bathed by the waters of the Caribbean Sea, which lends itself to activities such as snorkeling, kitesurfing, or just enjoying a nice swim.

Democracy can’t protect the environment. Capitalism will continue to find ways to eat up the geology and democracy can’t stop it. Only a nationalistic government with heavy hands can defend the land. It is up to you if you want more of the same!

Think about this over some time. A heavy handed nationalistic government will not change the instances of the rape of the environment. What will change is the defilers, there will be defilers, then after kissing arrrrssses, they will have the approval of the bosses. Any unapproved defiler will be shot.

Yes it will! Between 1930 and 1961, STO DGO city was known as the “garden city” and if any imbecile tried to cut down trees for charcoal or furniture, they were handed, judged, and executed right there on the spot.
The raping of the flora took hold and speed in 1986 when the Duvalier left and the pldprd began their policy of allowing unmonitored immigration, together with greedy natives (Dominican military and politicians), led to the attack on the national parks.
Again, democracy is the worst system for defending the nation against internal enemies.

It is time to kick democracy out for placing “greed and money” over the environment!

This illegal removal pursuit in Bani and other areas of the country is so obvious, ………to the public and gov’t officials, **officials who may pass by the areas doing routine daily activities and then do nothing. It is only when there are numerous complaints does government step in. It would be proper for legal removal areas to have posted permit numbers or documents in obvious locations and each piece of heavy equipment have same.

**It should be mandatory for every public employee, no matter area of service, who observes questionable actions must stop or report them to appropriate authorities.

Enough with the talking and giving the enemy second chances. This only gets solved by militarizing the area and adopt the “guilty first” policy! No more laws that can’t be implemented. Do not let the slow and costly Congress legislate laws. Simply put an Army depot of at least 50 soldiers and let the one navy boat patrol twice a day near the coast. At least is better than waiting for civilians to complaint and the PN take action on the matter.
Democracy has failed AGAIN to protect the Dominican flora!!!!