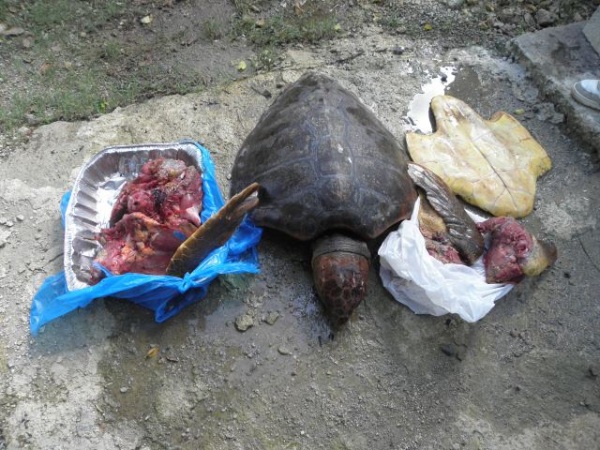 Santo Domingo.- The violation of spaces by speedboats and indiscriminate fishing in Cabeza de Toro, La Altagracia province, affects marine biodiversity with the death of sea turtles, manta rays and other species that are impacted by boats killing or maiming them.

It is an old problem to which the authorities have turned their backs, according to experts, while biodiversity is declining with the increase in human activities in the area. The best example is the death and mutilation of turtles and other species that have increased in recent times.

Fernando Sánchez, president of the Los Arrecifes de Bávaro Ecological Foundation, told Diario Libre that with the increase in the population of Bávaro and Punta Cana, the number of boats and fishermen increases in the same proportion and the maritime coast of about 10 kilometers of beach is impacted from Arena Gorda to Cabeza de Toro.

the same has the mangroves that disappear, every time a new project comes authorities get their envelope and nobody cares, that’s what’s going on. There is no real preservation or respect for nature. What’s the real pollution of every hotel in the area? i think we would be surprised

This democracy is incapable of protecting the interior and coastal areas of DR. Illegal settlement, misuse of the land, misuse of the coastal areas, disorder, and demographic explosion are serious violations to DR and it is time to evict democracy for failing to attend the island on these issue.
The rush to desertification, a typical sign of unchecked capitalism by an inappropriate type of governance, will lead to failure just like the Easter islands by the Rapa Nui!
You want to save DR, kick democracy out for being antinational and antienvironment!