“I had never seen so much water,” says a 74-year-old man in Villa Vásquez 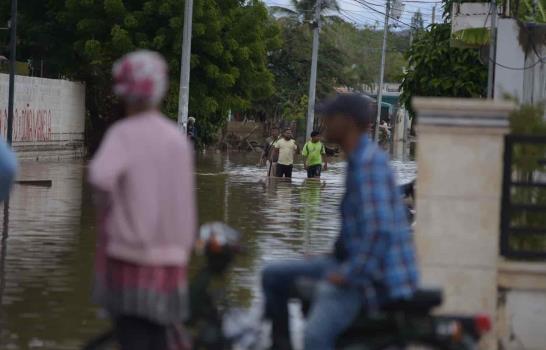 Drowned cows and goats, damage to agriculture, and hundreds of displaced families are the balance left in the municipality of Villa Vásquez, Montecristi province, due to the overflow of the Charcaso dam due to the heavy rains recorded in the early hours of this Monday.

Henry Castro, mayor of Villa Vásquez, reported that dozens of people affected by the floods were rescued using a mechanical shovel.

He was shocked by the moment when the machine’s controller was able to remove a mother and a four-month-old child.

The majority of displaced people are located in the homes of relatives and friends. While other families are concentrated around their homes, waiting for the water level to drop to try to rescue their trousseau.

Yolanda Vásquez, a resident of the Azul neighborhood, told Diario Libre that while trying to save her life and that of her 12-year-old son, she saw how the current of water dragged her household items.

“I was left alone with the clothes I have on,” Vásquez said.

Claudio Antonio Tavárez, a victim of Brisas del Canal, said that he only had time to save his motorcycle after taking his children to a safe place.

“The gas tank went past me when I got out on the engine,” Tavarez said.

Julio Almonte, 74 years old, assured that in his lifetime, he had never seen as much water as the one that circulated through its streets today.

“Not even when Cyclone David, which is the biggest thing that had ever passed through here, had brought in so much water,” he commented.

The water current caused by the reservoir’s overflow also destroyed a significant number of goats and cows. In addition, they damaged crops of rice, bananas, and other agricultural products.

The governor of Montecristi, Nelsy Cruz, appeared at the scene and said she is working on creating a committee to assist the affected people.

In addition to the Government, it is integrated by the Social Plan of the Presidency, the Economic Kitchens, and other State agencies.

“We will be assisting in everything they need in Villa Vásquez and other municipalities in the province affected by the rains,” said the representative of the Executive Power in that border province.

In addition to Montecristi, the rains recorded on Sunday night also caused flooding in other towns in the country’s northern region.

A man died after a felled Javilla tree fell on him due to the strong winds recorded last night in the municipality of Sabana Iglesia, in the province of Santiago.

The Civil Defense identified the deceased as Manuel Azcona. At the time of the incident, the victim was covered by the breezes and rains recorded in that demarcation.

In addition to the tree, the wind and rainfall knocked down several power lines and left a large part of the townspeople without power.

Floods were also reported in Puerto Plata, Dajabón, La Vega, Espaillat and other towns in Cibao.

REAL ! This is we’re me and my FAMILY IS FROM MAN WTF THIS (word deleted) GOVERNMENT AND THEIR PARTNERS WASTE BILLIONS OF PESOS ON TOURISM BUT WE CANT GET A DRAINING SYSTEM HERE ??? All the money goes to the capital city were all these nasty scums live draining our economy by giving them free every thing BUT WE DONT HAVE A PROPER DRAINING SYSTEM HERE HELLO ??? OUR MAIN HOSPITAL IS GONE ! We have a Mobil PIECE OF HOSPITAL HERE THAT WE Don’t use Becuz it’s ALWAYS FLODED COME ON MAN WE SICK OF ALL THESE INVESTMENTS GOING TO TOURISM AND THE CAPITALS HOW ABOUT US THE REAL DOMINICANS THE REAL CAPESINOS (country people lol )WE DONT GET SHIT . I respect the president with my heart and soul but please this we’re my family lives man