The rains decrease in intensity, but 19 provinces remain on alert 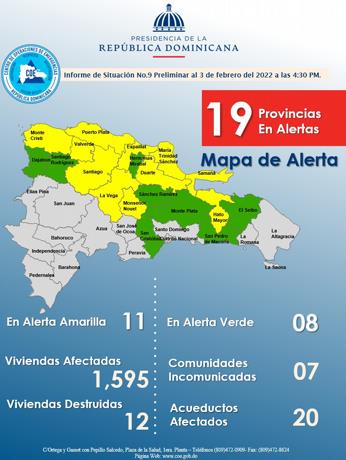 A gradual improvement in weather conditions is expected due to removing the mid-and high-level trough. A partly cloudy sky will dominate with some weak to moderate rains and isolated thunderstorms in the regions: north, northeast, southeast, and Central Cordillera.

Due to the rains that have occurred and the one that is forecast for the next 24 hours, the Onamet maintains a meteorological alert and warning for possible sudden flooding of rivers, streams, and ravines, as well as landslides and urban floods.

On Saturday, good weather in the morning hours with sun and scattered clouds were generated by the North Atlantic’s anticyclone. In the afternoon, the northeast wind will bring associated humidity from a trough to the east of our territory; therefore, we foresee cloudy intervals, with weak to moderate rains in the northeast, southeast, isolated points in the southwest and Central Cordillera, the product of low pressure to the southeast over the Caribbean Sea.