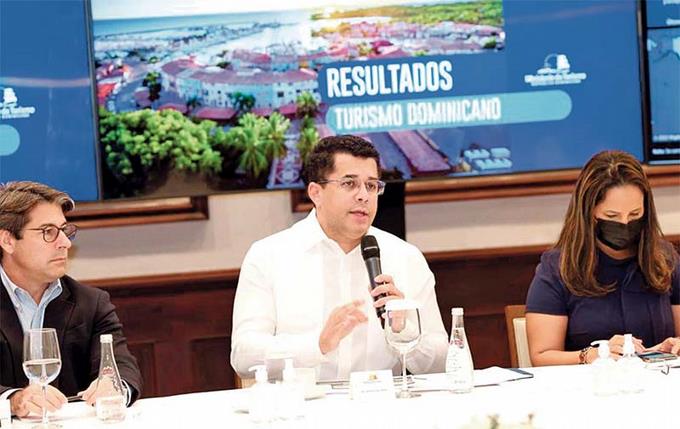 David Collado during his meeting with the media, where he highlighted the success of the tourism sector

Good January. More than half a million non-resident visitors chose the Dominican Republic as a rest destination, exceeding January last year by 129%.

Santo Domingo, DR
The Minister of Tourism, David Collado, informed yesterday that in January of this year, 530,956 non-residents arrived in the country, equivalent to 129% over the same month of the previous year, 82% of which were of foreign origin.

Despite the cancellations of flights from the United States to the Dominican Republic due to the snowstorms that affected the East Coast of that country, in January 2022, the arrival of non-residents remained above half a million tourists, as in the months of 2021.

Collado offered his statements during a press conference and pointed out that the projection foreseen for the end of this year is the arrival of seven million visitors.

He also spoke about the impact of the Covid omicron variant and how the tightening of sanitary measures affected the arrival of Canadian tourists to the country.

However, he indicated that this did not hinder non-residents from the rest of the world from visiting the country, which registered an all-time high of 245,301.

He cited that Punta Cana airport concentrated 55% of total arrivals of non-resident visitors last month, while the terminals of Las Americas, Santiago, and La Romana remained above January 2021 figures.

Sixty percent of tourists stayed in hotels, with an average of 11 days. Tourists received in January were mainly from the family and adult segments.

Ministry of Tourism (Mitur) estimates indicate that the total number of inbound commercial flights to the Dominican Republic in the first month of the year was 5,120, from 149 different airlines and 169 different airports.

Nine out of 10 hotel rooms were in operation, and of these, 73% were occupied. Foreign guests accounted for 89% of the total. Hotel occupancy in the Dominican Republic already resembles the occupancy levels characteristic of the pre-pandemic years. “The recovery of the hotel industry has been a generalized phenomenon in all areas of the country,” stated Collado.

Collado highlighted that 2022 began with two hotel project approvals, for US$34 million and 267 rooms, increasingly lax border restrictions, and room reservations per night 19% above 2019.

At the event, the Vice President of the National Association of Hotels and Restaurants (Asonahores), Andrés Marranzini Grullón, highlighted Collado’s work under the circumstances in which he was able to “rescue tourism.”