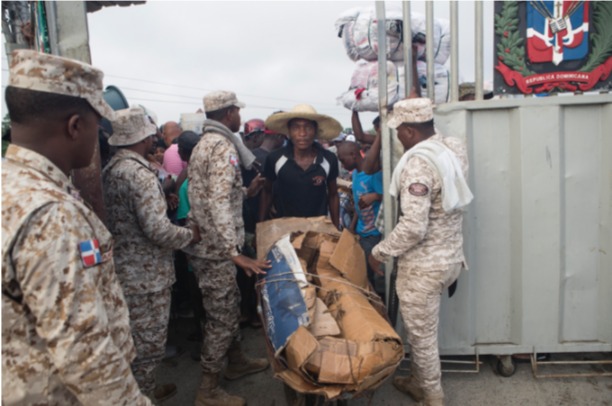 Livestock theft and other crimes by Haitians are a concern on the border. archive

The Haitian authorities have appointed a special prosecutor who, together with other personnel from the unit, travels the border area to prevent cattle theft, the movement of undocumented immigrants, and other illegal actions.

This information was offered by the Dominican consul in Juana Méndez, Barbarito de León, who participated in a tour and later in a meeting with ranchers and the Army commander, Major General Julio Ernesto Florián Pérez.

The diplomat said that work is being done in coordination with the Haitian authorities to confront the entry of undocumented immigrants, and theft of cattle and vehicles.

In turn, he clarified that the Haitian prosecutor travels, with Dominican representatives, the border area to detect and confront irregular actions.

For De León, these measures constitute an advance of the coordinated efforts between the two countries.

And he added that, on the instructions of President Luis Abinader, responses are being given to the points agreed upon at the last meeting between civil, military, police, ranchers, and other sectors of the border area in Dajabón.

He defined the meeting as “excellent” and assured that before “faith in the border was being lost, but now there are concrete decisions to put an end to that problem.”

He also reported that the Army commander appeared to announce the delivery of units and equipment and that these “will stay here, to end this and we highlight this effort by the Army to end all this,” De León said.

In this context, he indicated that the unit against rustling (animal theft) was created, with the integration, first, of 30 soldiers, which is being carried out in coordination with Consul Margarito de León.

“We met with the consul of León, with officials from the Government and ranchers, and we have been able to work together to control the theft of merchandise, the theft of animals and the passage of illegal persons,” said Florián Pérez. “We are sure that, with the launch of this patrol unit 24 hours a day, we will solve a problem of decades and we are all on the way to make things go as they have to go,” he insisted.

Apart from the 30 soldiers for the cattle rustling unit, four tracks, 30 motorcycles, drones, and intelligence personnel will be used to gather information and determine how these events are occurring on the borderline.

A preventive measure
The commander of the Army informed that since the 7th of this, more units had been sent to the borderline.

“Simply, this is as a preventive measure, so that, if necessary, seal the border more, in case there are problems or continence, but it is only preventive,” he emphasized.

To this point, he clarified that “the actions of Bayahonda and the border remain the same, as always.”

The high-ranking military commanders who accompanied the Army Commander were General Ángel Camacho Ubiera, Inspector General of the Army; the commander of the Fourth Brigade of that military body, based in Mao, Colonel Germán Rosario Pérez, and representatives of Immigration.

Repatriation of illegal immigrants
From January 1 to the 10 of this month, guards assigned to the Army’s Fourth Brigade have arrested and handed over to immigration authorities in Dajabón at least 7,697 undocumented Haitians trying to enter the country irregularly, and others while hiding in mountains, roads, abandoned houses, buildings, and other places.

Another problem is Cattle theft rustling involves the theft of cows, sheep, horses, or other animals owned by a person. This crime is frequent in nations that have developed livestock activity since the animals can have a lot of value.  One of the most significant difficulties that this crime presents is the lack of sanctions for its perpetrators, whether organized groups or the theft of small amounts of animals, which is usually accompanied by slaughter in the same place where the crime is committed. Ranchers consider it essential to combat rural insecurity regarding their cattle.

One of many never ending Haitian problems for Dominicans. This used to irritated Trujillo a lot.