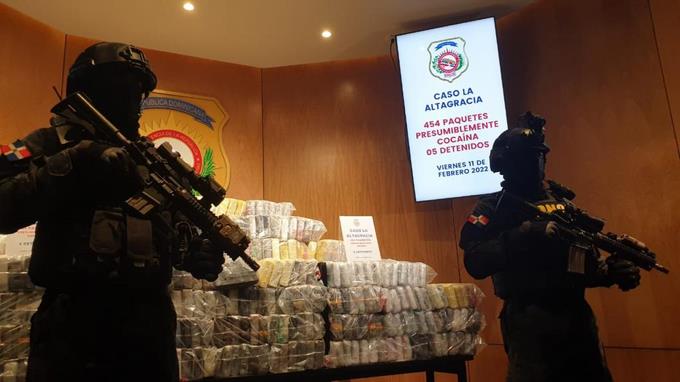 After an extensive maritime and land interdiction operation was deployed on the coast of Bayahibe, agents from the National Drug Control Directorate (DNCD) and members of the Navy seized 454 packages, presumably of cocaine, in the province of La Altagracia.

The incident occurred after receiving reports that a speedboat with several occupants, intended to leave Dominican territory for the neighboring island of Puerto Rico,  carrying an undetermined amount of controlled substances.

“Indeed, after intense monitoring, the individuals, noticing the patrolling of naval units and interceptor boats, returned until they reached the shore of the beach, originating a land pursuit, which minutes later resulted in the seizure of 16 bags containing the 454 packages”, informed the authorities.

In the operation, which lasted just over 10 hours, five men were arrested, all Dominicans.

“According to the investigations, it is a criminal structure that operates in the eastern part of the country and uses speedboats to traffic drugs between the Dominican Republic and Puerto Rico,” the note states, while stating that the Public Ministry together with other agencies are conducting exhaustive investigations to arrest and bring to justice other members of this criminal network.

A 26-foot long boat, a 75-hp outboard motor, five cell phones, personal documents, and other evidence were also seized in the joint operation.

Since the beginning of 2022, 3,554 kilograms of cocaine, more than 800 pounds of marijuana, hundreds of ecstasy pills, crack, and other controlled substances have been seized, according to figures from the DNCD.