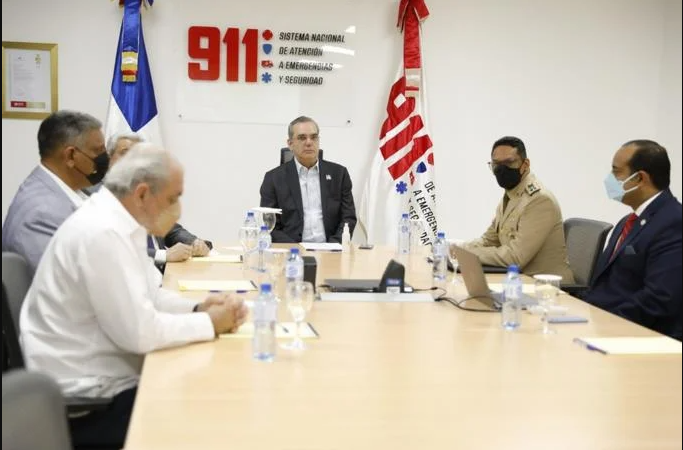 President Luis Abinader held a meeting of about two hours at the National Emergency and Security Service 9-1-1 to address the projects and plans being executed during this year in the entity.

The meeting was held behind closed doors; however, a press release explains that the points that must be improved to make emergency responses more efficient were touched on, one of the main criticisms of this current management of 911.

That same statement indicates that the president supervised the consolidation processes of the entity, in addition to the expansion projects in the coverage of services in the border provinces.

After participating in the meeting, the president left the building. Despite the reporters’ insistence, he only limited himself to saying “everything is fine” concerning the operation of the 9-1-1 system.

Also participating in the meeting was the executive director of the 9-1-1 system, pilot colonel, Randolfo Rijo Gómez, ERD; the Minister of the Presidency and president of the National Council of 9-1-1, Lisandro Macarrulla, and the Minister of the Interior and Police, Jesús (Chu) Vasquez; who also refused to talk to the press.

The press department of the National System for Attention to Emergencies and Security 9-1-1 indicated that the meeting details would be revealed later through another statement.

Yep… they answer phone immediately…They got lost, than we went down the street to get them, and bring them the house… it took only 1 hour, and 22 minutes for them to come… 😂 😂 😂…
Yep… 911 is great… Maybe for you mister president… but for rest of population…. well good luck 🤞.. 😂

911 incompetence nearly killed me !Heart attack! They came after 45 min. could not find my cedula they will not take you without cedula [that means tourists cant use it they must call a cab.Ced found they try to get me on gurney it wont fit thru door so they drag me by arms to sidewalk and gurney! On gurney they bang it against bumper of ambulance [wont enter] so they [3 men] push me down street 20 feet or more and start pushing to the ambulance this time it works the legs collapse and in i go so fast it will not stop bangs and cuts my head. Off we go ware to? they argue about ware to take me to. Start going and they get lost have to stop every block to ask directions they go thru the barrios [no one knows the direction to hospital] They take a person on street to show the way ! We arrive at hospital. Medic of ambulance asks hospital for gurney so they
can leave [I’m now not a passenger] Hospital staff tell them no gurney for use i am not a patient yet. Big argument [ambulance crew want to leave] So hospital staff say put me on the cement floor of loading dock. Luckly an old man mopping floor says in the warehouse their is an old gurney [no wheels] they could put me on great idea ! I now am placed on gurney from ww1 with 2 inches of dust and rust. Everyone now happy they close the door on warehouse room and leave. I am there i don’t know for how long. My wife is searching for me. No one has any record of my being there except the old man moppint the floor. He leads my wife to me! I can now talk. Slowly i tell my wife get a taxi and get me out of there. Arrive home and call doctor he comes and i survive despite the almost 2 hour adventure in the barrios.
Would i ever call 911 again NOT IF I AM ALIVE AT THE TIME !!!!!