National Police agents must respect vehicles that do not have loud music. The director-general of the National Police, Major General Eduardo Alberto Then, reiterated this Saturday to the personnel under his command that they should refrain from detaining vehicles in transit or parked with their sound equipment (music) turned off or with low volume.

In this regard, Major General Alberto-Then warned that he would remain vigilant to verify that police personnel comply with the instructions to refrain from detaining drivers of vehicles with music installed in cases where their equipment is turned off or with the volume according to the allowed decibels.

“We will be vigilant to correct through internal controls any action contrary to the legal norms and the instructions we have given by police agents,” he said.

Major General Alberto-Then recalled that he had already met with representatives of the Dominican Federation of Merchants and the Association of Music Businessmen to define several points, including actions that will allow the removal and control of loud noises from residential areas as not to affect the tranquility of the citizens.

Don’t think the police have been issued decibel meters. Yet, guess who summarily be setting the standard of what is loud.

These vehicles are bothersome.

There are standards regulated by the law mr. Paul. Decibel meter can be downloaded as app. People playing loud music are sick and selfish. They dont regard of small childrens…or those who like other type of music…or none at all. I have a problem in Veron…Bavaro. Arround the park kn Casita bella vilage are 5 kolmados and cafeterias all compeeting the loudnes …all within 50 meters radius…and it drives me mad and i am not the only one. 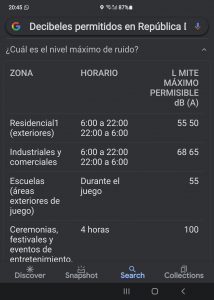 I have never understood why Dominicans are so loud. They speak over one another and every where you go there is loud music. Then you have the guys buying scrap and selling veggies out of a truck.

they are not loud if you are deaf.

The loudest child at the table gets the food and mamá’s attention. It is a learned behavior, be loud.

They have little else. It is the ‘rooster’ mentality. They think crowing makes them the big man and the women who are not sexy talk and scream as a way of drawing attention to themselves