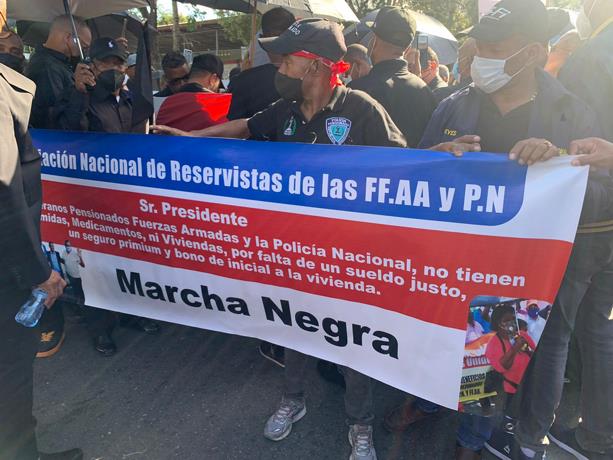 Santo Domingo.- A multitude of veterans of the Armed Forces (FARD) and the National Police (PN) lead the “black march” Tuesday morning, a “mourning tour” to the General Directorate of Retirement and Pensions (DGJP ).

The military and police demand a salary increase from the government of President Luis Abinader, who “has promised on multiple occasions.‘

The protesters, on behalf of the National Association of Reservists of the Armed Forces and the National Police, denounce that the members of the military forces do not have food, medicine or housing.

“Mr. President, pensioned veterans of the Armed Forces and the National Police do not have food, medicine or housing, due to the lack of a fair salary, Premium insurance and an initial housing bonus,” reads the banner.

We can be confident there are many members of lower rank veterans who do need salary increases. They are the ones who have been indirectly abused. Abused, because the legions of veterans of higher ranks always seemed to have achieved promotions just prior to their retirements, promotions allowing more salary benefits to come their way. This skimming of cream off the top for the top ranks left little more than sour milk for the lower grades.