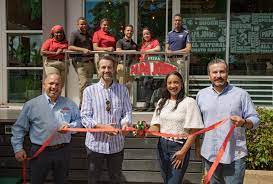 The new Papa John's branch will operate Monday through Sunday from 9:00 am to 9:00 pm.

Marcos Sánchez and Osvaldo Sazo, the prominent executives of the franchise, presented to the general public a comfortable and easily accessible space so that everyone can enjoy the varied menu offered by the brand, under its slogan “Best Ingredients, Best Pizza” while indicating their commitment to continue with the expansion strategy of the brand throughout the national territory.

The franchise, which opened on the 5th of this month, will operate from Monday to Sunday, from 9:00 in the morning to 9:00 at night, and its “delivery” service for the area and its surroundings. Currently, Papa John’s has a workforce of almost 300 employees willing to offer you a quality experience and memorable service.

History: Papa John’s Pizza, founded in 1984 in Jeffersonville, Indiana, is the third-largest pizza chain in the United States and worldwide. It has been awarded for nine consecutive years as the number one pizza chain in Consumer Satisfaction in the United States. It has been characterized by offering the highest quality and excellent service products. Papa Johns International, Inc. is the world’s third-largest pizza company, with system-wide sales and approximately 3,000 restaurants worldwide.