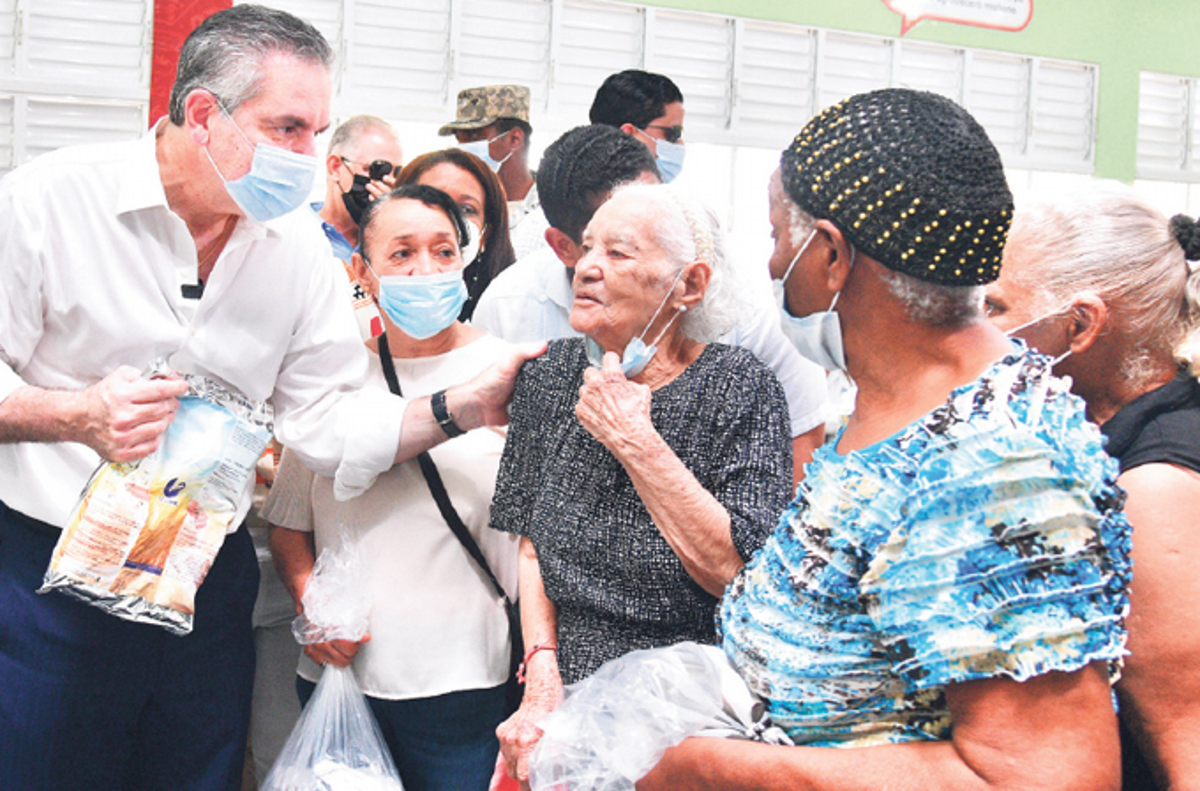 Early in the morning Dona Eulalia arrived to seek help from Propeep. JOSE A MALDONADO/LD

With her cane on one side and the firm arm of her daughter Veronica on the other, Mrs. Lala, as her neighbors call her, was at the door of the school since 6:00 a.m.

Santo Domingo, DR
Driven by the memories of the water running under her bed and that, on dozens of occasions, has reached her knees preventing her from walking down the hallway of her house, 100-year-old Doña Eulalia Bueno, got up early yesterday to arrive at the day of social inclusion that was taking place in one of the schools in her community; Los Guandules.

With her cane on one side and the firm arm of her daughter Verónica on the other, doña Lala, as her relatives and neighbors call her, was at the door of the school since 6:00 a.m. to take one of the first shifts and not to miss the opportunity to access the government’s social assistance.

“Early in the morning we were already here, and there were already people,” said Verónica, who carefully watched over her mother’s every step.

Amidst the overwhelming sound of the multiple conversations of those present at the activity organized by the General Directorate of Special and Strategic Projects of the Presidency (Propeep) and dozens of other state institutions, Verónica expressed that they found out about it through her daughter, Vida.

“Vida gave us life,” she said, after explaining that the young woman insisted that she take Doña Lala to have her eyesight examined and “to see if she could get a little pension.”

Days under the storm
Both Eulalia and her daughter have no fixed income; in the case of Verónica, now 62 years old, she had to leave her job in a free trade zone to take care of her mother because “she cannot stay alone.”

Recently, this family had to live through a scenario where they saw how Doña Lala’s house was lost among the waters due to the urban floods in Los Guandules during the 2021 hurricane season.

“I arrived and found her with water on her knee, look over there…” she said while Verónica pointed to her mother’s knees.

Faced with the situation, they had to take shelter in another place, and while they tried to maintain the physical integrity of Eulalia and the others, they took “even the spoons” from the little house. “Now and then, she tells me that she wants to leave that house, but I don’t have the money to get her out of there,” he said.

Each ice cream costs five pesos, and “on good days,” they sell about 20 for a total of 100 pesos a day, according to Verónica.

Los Guandules
In Los Guandules, where this family has lived for more than 50 years, the community members move through increasingly narrow streets, where the sidewalks and curbs have been lost because of the houses that are more and more on the shore.

The road space allows to reach one of the impacted sectors for the development of Domingo Savio, and already, some houses have been reduced to rubble. In contrast, others remain with the number that identifies them as one of the homes to be evicted for the continuation of the project.

Inclusion day
In this sector, the sixth “Social Inclusion Day” of Propeep took place this Tuesday so far this year.

At the opening ceremony, the head minister, José Leonel “Neney” Cabrera, said that this type of activity used to be carried out once a week, but now it will be every Tuesday and Friday, on the instructions of President Luis Abinader.

Cabrera emphasized that the day would benefit more than 4,000 citizens in what he defined as “the initiative with the greatest social impact” of the government of President Luis Abinader.

ASSISTANCE
The elderly.
With the day, the neighborhoods receive, during a whole day, ophthalmologic and dental services, attention to the elderly, and accompaniment for the Late Civil Registry to citizens who lack a declaration of birth.