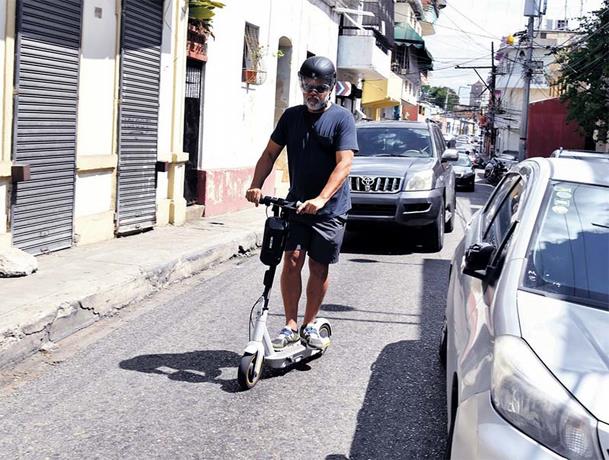 In recent years, environmental and electrical trends have dominated the market, as they represent “modernity and comfort” for those who choose to be their users. The electric skateboard represents this new lifestyle.

One of these cases is Thomas Martínez, who has decided to abandon the comfort of four-wheeled vehicles to make his routes on an electric skateboard through the city of Santo Domingo, “abandoning his vehicle” to make way for this new mobility, which defines more as “economical” and “fast” when transporting.

“I walk the entire city with my scooter, my friends tell me that I’m crazy as I ride an electric skateboard at my age, but the experience has been very cool,” Martínez told this written medium.

This idea comes to Martínez after going on vacation with his family to the German city of Mayhem. “I traveled with my children to that city and all the transportation we used to get around it was a skateboard and I thought I could do the same in my country and that’s what I do until now.”

Thomas Martínez’s inspiration has been so far-reaching that he has created his small community on Instagram under the user @andoenpatineta, in which he encourages people to transport themselves and adopt this rhythm of life.

Gilberto Cáceres, who at 62 years old has jumped on the wave of electric skateboards in just two weeks of use, emphasizes its benefits, emphasizing that it is one of the best decisions he could have made, even if he continues to use his car for longer journeys.

“I go from home to work and from work to home, in this period of time I have only charged it once and it almost does not consume electricity,” said Cáceres, who recalls that the time it lasted in the plugs to return from his home to work and vice versa on Bolívar Avenue, which is where he travels, went from being almost 35 minutes to ending up being on the skate of five minutes.

“To get around and walk more safely, I used the bike lane, because when I arrived through Bolívar, this allows me to do so,” explained Cáceres.

While enjoying the afternoon with his young children, Mr. Saúl Pérez was riding an electric skateboard in the Colonial City. Saúl’s motivation for buying one of these devices was to be a fan of “electric mobility,” as he confessed that he is. “I have an electric skateboard, an electric car, and I work in the technology environment in the same genre,” he added.

During the week, he moves on his skateboard, from going to work to clearing his mind; the time difference between his different journeys is around much more than 20 minutes.

Are the streets of Santo Domingo ready for electric skateboards?

Something in common that the three interviewees have professed is that the conditions of the streets in Greater Santo Domingo are not enabled correctly since the safest route they have is the cycle path. Therefore, it must be exclusively destined for those who use bicycles.

Thomas Martínez considered that “the streets of Santo Domingo are not suitable for this type of traffic.” In his Instagram blog as a citizen, he has highlighted that the bike lane must be identified in the same way for skateboards.

After defeating Poland, the Queens of the Caribbean claimed the unbeaten team