Sabana Perdida under the scourge of crime 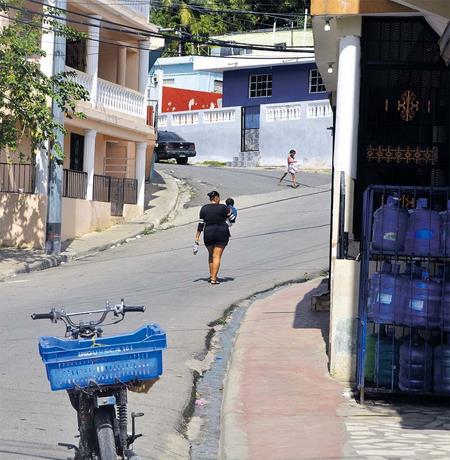 “Women can't go out here early or late because if they have a phone they take it from them and rip out their wallets,” said Jacqueline Santos.

Neighbors. They say that they have unsuccessfully demanded an increase in patrolling in that sector of North Santo Domingo.

The La Javilla and Los Cerros sectors, both belonging to Sabana Perdida, one of the largest and most populated demarcations of the Santo Domingo Norte municipality, deal day by day with a series of deficiencies, among which blackouts, delinquency, lack of recreational spaces, and garbage collection.

Jacqueline Santos, a resident of La Javilla for more than a decade, said that both she and her neighbors have insistently and “unsuccessfully” called on the police authorities to increase patrols at night, since it is precisely at those times when criminals take advantage to commit crimes, stripping their belongings and even injuring any citizen who comes their way.

“Women can’t go out here early or late because if they have a phone they take it away and rip out their wallets,” she complained.

This scourge afflicts the residents of La Javilla and the residents of the adjoining Los Cerros sector. According to Teresa Taveras, they lack an efficient energy service has contributed to the rising crime wave.

“The light comes one day, yes and one day no,” said the citizen, who, according to journalists from Listín Diario, has been residing in that demarcation for more than thirty years. Taveras maintained that the issue of blackouts had been the “Achilles’ heel” of politicians and their campaign promises over time. However, she assured that eradicating this problem has only remained in pledges.

Rodolfo Camarena, an employee of a mechanical workshop in the area, indicated that the lack of electricity had affected the operation of several businesses, including the place where he works. “If you want to work, you can’t because there is never electricity, but if you want to do anything at home, you can’t either; that’s where thieves take advantage,” he said.

In addition to these two worrying situations, the residents of La Javilla and Los Cerros mentioned within their needs the review and readjustment of the drainage and sewerage of their roads, alleging that the streets become flooded by heavy rain over that area, hindering the normal passage of vehicles and pedestrians every time they occur.

Other services
It is noteworthy that both communities of Sabana Perdida have a medical clinic and a Primary Care Unit (UNAP) built to offer health services to the population that resides there.

However, during a tour of the area carried out by a team from Listín Diario and corroborating the opinions of some community members, it was found that neither of the two spaces has opened their doors, according to some “due to lack of equipment.”

In another order, the residents of La Javilla and Los Cerros demanded that the central government create recreational spaces such as sports fields, clubs, and parks.

They also asked the Santo Domingo Norte mayor’s office to make the garbage collection service more efficient since, they argued, the truck used for these purposes does not enter their communities and only travels along the main roads of the municipality.

Inflation.
The residents of both sectors of Sabana Perdida also complained about the high cost of food products that make up the basic family basket.

Difficulties.
They indicated that the majority of the inhabitants of these demarcations are informal employees, whose income most of the time does not exceed the value of the minimum wage, so it is a difficult situation to be able to support their homes.