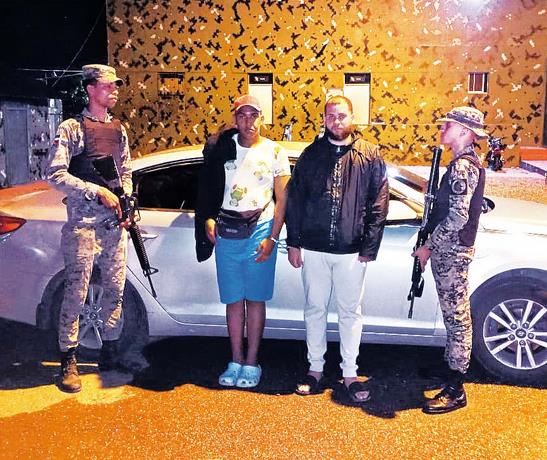 Military surveillance has increased along the border to prevent foreigners from entering illegally.

The term “boy” and the typically Cuban accent used by one of the immigrants betrayed six out of ten Cubans who have been arrested by members of the Army of the Dominican Republic and Migration on the Dominican-Haitian northern border of Dajabón after being trafficked from the neighboring nation of Haiti.

They almost passed
The guards stationed at the Cañongo checkpoint in Dajabón, after checking the cars and realizing that there were no Haitians, immediately gave way to the Cubans to continue their route due to their physical resemblance to the Dominicans.

However, one of the Cubans, victims of human trafficking in Haiti, at one of the military checkpoints, had the idea of ​​speaking and asked a guard, “Hey, boy, this is the route that leads to Santiago, the capital.

That caught the attention of members of the Army, who immediately proceeded to retain the car with the immigrants for investigation purposes.

“There is no way to differentiate a Cuban from a Dominican, because they look a lot alike, especially if the Cubans are from the East, like Santiago de Cuba, Matanzas, Sierra Maestra, Cienfuegos and other provinces,” said the cultural facilitator and musician from people of Cuban origin Jorge Meléndez, resident in Santiago de los Caballeros.

Last Wednesday, members of the Fourth Brigade of the Dominican Army in Mao and the Tenth Battalion in Dajabón, which until Friday led the promoted General German Rosario Pérez, arrested four Cubans who entered the country from Haiti, irregularly.

According to the Dominican official, the four foreigners were seized at the military checkpoint in the Los Laureles sector, almost at the entrance to Dajabón.

Last Friday, six Cuban citizens were detained by members of the Army and the S2 Intelligence Service at the Cañongo checkpoint.

The arrested foreigners carried passports with Haitian visas for one year.

Hahaha we can differentiate just hear a Cuban speak !

But yea good job , send them back !

The policia are probably driving there cars now