Puerto Caucedo: 233 packages of cocaine occupy a container that went from Guatemala to France 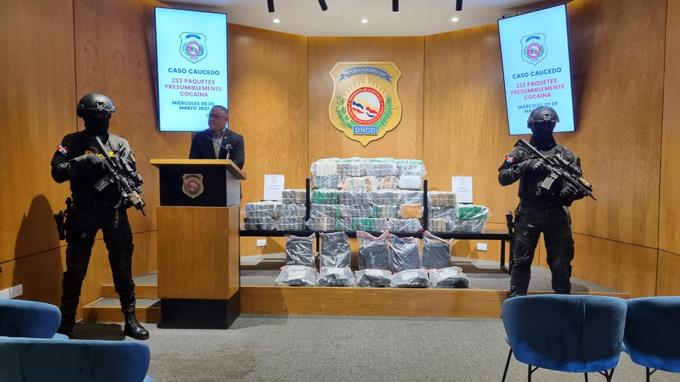 The National Directorate for Drug Control (DNCD) reported that 233 packages of cocaine were seized at the Caucedo Multimodal Port, in coordination with the port’s Military Security, intelligence agencies, and under the coordination of the Public Ministry.

DNCD agents, military personnel, and canine units outlined dozens of containers that arrived in the country from Guatemala. After verifying one of them, ten black packages were found inside, containing packages of the substance.

It has been determined that the container, loaded with dozens of boxes of clothing, was in transit through the country and shipped to France.

The Public Ministry and the DNCD have initiated an investigation to arrest and bring to justice the international drug trafficking network members.

“We are expanding the investigations because since it is a transit container, the process becomes more complex; however, we hope that as the investigation progresses, more details will be offered in the next few hours,” the note states.

The authorities have continued to redouble operations against national and international drug trafficking, seizing during this 2022 almost six tons of cocaine, marijuana, crack, ecstasy, among other controlled substances.

Likewise, it is highlighted that during the first months of this year, more than 1,200 people have been arrested, 93 percent Dominicans and 7 percent foreigners.

It is also highlighted that as part of the new strategies, together with the Attorney General’s Office, 36 firearms of different calibers, 356 vehicles, three aircraft, 11,732 dollars, and 2.7 million pesos have been confiscated, well as the extradition of three Dominicans. , arrested in operations carried out in Dominican territory.

The 233 packages seized in this operation were sent under chain of custody to the National Institute of Forensic Sciences (INACIF). They will determine the type and exact weight of the substance in its analysis.