New airline users will have 30% and 60% lower rates 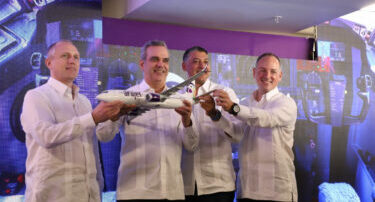 The new Arajet airline users will have greater connectivity with other destinations and access lower airfares of 30 and 60 percent of market prices, President Luis Abinader said yesterday after leading the ceremonial act of opening of operations of that airline.

The head of state stressed that today a dream has come true. The country has a national flag airline with a mixed investment that expands the possibilities for passengers of connectivity with other important destinations.

“There is no doubt that the community of Dominican men and women living abroad, whom this government always has in mind, will greatly benefit from air fares at very low prices,” Abinader said. This was confirmed by the president of the Board of Directors of the new airline, Víctor Méndez Pacheco.

Also participating were the Minister of Tourism, David Collado; the president of the Civil Aviation Board, José Marte Piantini; the directors of the Airport Department, Víctor Pichardo; of Customs, Eduardo Sanz Lovaton; Specialized Corps of Airport Security and Civil Aviation, Major General Carlos Febrillet Rodríguez, and Major General Leonel Muñoz Noboa, of the Air Force, among others.