Earthquake of 4.1 reported in Higüey 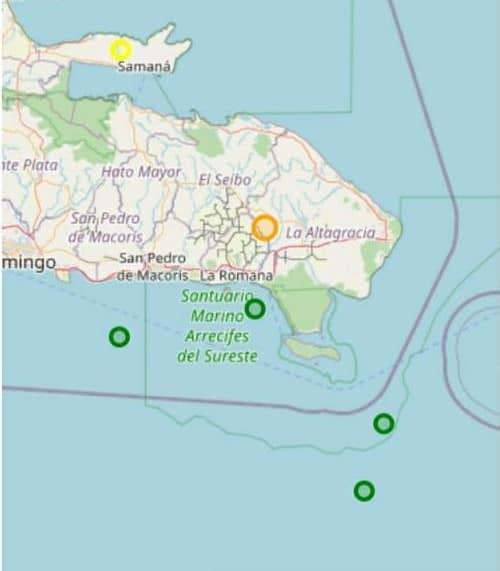 The phenomenon had a depth of 115.2 kilometers. ( EXTERNAL SOURCE )

Citizens say they have not felt the earthquake.

According to information from the National Seismology Center of the Autonomous University of Santo Domingo, an earthquake of magnitude 4.1 was recorded early this Wednesday in the east of the Dominican Republic.

The telluric movement occurred 15.2 km west of Higüey, La Altagracia. The phenomenon had a depth of 115.2 kilometers.

However, people consulted by Diario Libre claimed not to have felt the tremor and were surprised by the question.

“Even though you get up early, you’re always on the move; it’s hard to feel it,” said Endelson Méndez when asked about the subject.

In that order, Sugerly Mercedes said that she did not feel any tremor, that she just found out that it had occurred.

The director of the Civil Defense of the Higüey municipality, Fernando Castrillo, said that they had not registered any damage caused by the earthquake.

He assured that they are carrying out an uprising in different parts of the province but that they have not had any news so far.

“So far that detail is up to us as an institution, we do a survey, but we cannot directly say that there can be no damage, we have not gone through all the structures,” he said.

He said he did not know if other institutions of the relief agencies have registered any news but that they remain pending.

He added that later he would give details of the uprising they are carrying out.

Citizens say they have not felt the earthquake. According to information from the National Seismology Center of the

This is just a note, the quake occurred near Guaymate, the pueblo just to the north of La Romana. Quakes are common in this area of Central Romana’s cane fields.