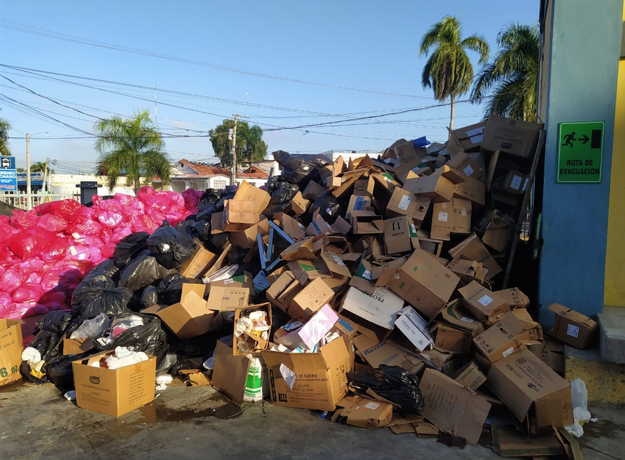 The council refuses to take out the unsorted garbage

The problem of collecting solid waste generated by the José María Cabral y Báez hospital by the City Council once again causes a public confrontation between its authorities. The hospital accuses the council of not picking it up, and it charges the director of the health center for not having the competence to handle it.

The management of the public assistance center directed by Bernardo Hilario accuses Mayor Abel Martínez of refusing to comply with the duty of collecting solid waste, which is piled up in the inner courtyard of the building, generating a very delicate situation.

On the other hand, the Mayor’s Office demands that the Ministry of Public Health intervene in the care center, given what it defines as its current director’s inability to manage the garbage generated there.

The director of the José María Cabral y Báez accuses the municipal authorities, headed by Abel Martínez, of not fulfilling their responsibility to proceed to remove the solid waste generated by that health center, where thousands of people come daily in search of health.

The hospital official specifies that the building corporation fails to its responsibility when it does not have the removal of garbage, creating a dangerous situation, which can cause serious disorders to those who work in the center and patients.

The Cabildo
Meanwhile, the spokesman of the City Council, Fernando Ramirez, said that the current director of José María Cabral y Báez does not know how to handle the waste of a hospital center, contrary to his previous ones when there were no conflicts.

The building official demanded that the health authorities proceed to intervene in that hospital center before what he defines as an incapable direction that only knows how to create gossip.

Ramirez said it’s not fair for city employees to be at risk of getting sick because the hospital’s director doesn’t sort garbage.

Management?
“In the years that the current management has been at the head of the city council, that problem did not exist and since this man arrived at the direction of the hospital, he only acts by mandate of his incapacity and his political bosses. He’s been told how that kind of waste should be handled and he keeps collecting all kinds of trash,” Ramirez said.

The building official demanded that the health authorities proceed to intervene in that hospital center before what he defines as an incapable direction that only knows how to create gossip.
Ramirez said it’s not fair for city employees to be at risk of getting sick because the hospital’s director doesn’t sort garbage.