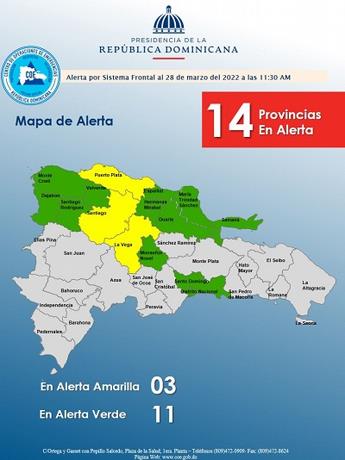 The Emergency Center (COE) declared eleven provinces on green alert and three in yellow due to a frontal system located in the northern part of the country.

During the day, they will continue to produce various showers in the afternoon and evening, with possible flooding of rivers, streams, and ravines.

The provinces on yellow alert are Puerto Plata, La Vega, and Santiago.

The frontal system will bring heavy downpours and occasional thunderstorms or gusty winds.

The COE urges the population to be aware of the official bulletins issued.