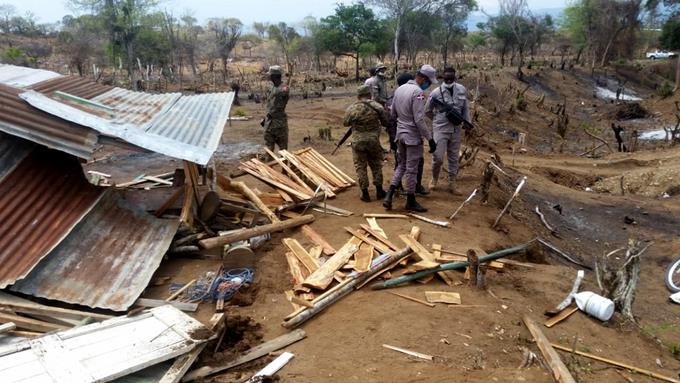 There are many conflicts over land invasions and evictions in Santiago

The invasion of plots of land is another problem that affects many owners of such real estate in Santiago and other parts of the Cibao.

For several years, this has been a constant in the area and has left consequences of deaths and injuries due to clashes between rival gangs and landowners who claim what they say belongs to them.

The stories told by these people are diverse, while cases in which people dispute specific properties have been heard in the courts for years.

The merchant Jorge Flete said that he has a piece of land for two and a half tasks in the Hato del Yaque sector here, but that he left his brother in his care and, since he lives a little retired, he neglected himself after two months that he was not going to see him.

However, he narrated that when he decided to inspect his lot, to his surprise, he found a field of cassava, bananas, pumpkin, sweet potato, and other items.

But when locating the one who planted agricultural products on his lot, he refused to leave it, alleging that he had made an investment and was not going to lose.

“We had to wait for the invader to collect his crops so that he would leave the place and then he wanted money, arguing that he was taking care of it,” he emphasized.

Something similar happened to Georgina Santana Montero, a resident of the United States, who said she had a piece of land of 840 square meters in the Arroyo Hondo sector here.

“I left him in the care of a man, he had not come to the country for seven years, but when I returned, I found that his son had built a humble home on my property, where he lives with his wife and two children,” he said.

He stressed that since the man did not want to leave the area, they went to court, but they agreed to leave him the part where he built and that apart from that, he wanted another 30 meters for the patio, but that part was ruled out in the agreement.

DAMAGES
Gave ground.
“He took a part of mine from me, but I had no choice but to give him that part, his father intervened and told me to help him, I made myself flexible for him,” said Georgina Santana.

Invasion.
Fidelina Rodríguez recounted that she had a plot of land in Yagu¨ita de Pastor, but when she went to see it, she found two shacks on her land.

What else is new! The government does not enforce no laws; only when it benefits them or wealthy foreign land owners!!

Lawless people living in a small island. There is no respect for the law, property and others. High density population is a menace to property! Hispaniola is on the brink of human failure where the mob rules the usage of resources. Good luck with your democracy!

i was going to spend 150,000 USD for land but this is the very reason not to invest in the RD…. rent a apartment for 8,000 RD a month…keep your money in your US Bank uless you live here full time…. these Dominicans got this figured out and with no Government control……ummm….good luck

I’ve got people who have land in the DR and those that are interested in possibly investing in real estate in the DR. Those that did buy property are discouraged and are telling other Americans not to buy in the DR because the DR will not give them what is in America is called “clear title”. So how can I or lawyers in the DR honestly advise foreigners to buy property when Dominican Republic government hasn’t written laws protecting land owners or/and the Judiciary will not uphold or enforce those laws. (If any laws are written in the DR.)