Yunior, the greengrocer from SDE who needs help to recover his livelihood 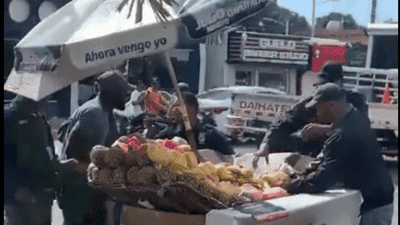 Yunior being stripped of his merchandise.

Yunior, the fruit vendor who this Saturday was stripped of his merchandise by members of a Santo Domingo Este Defense of Public Spaces brigade, needs your help. You can cooperate through Jompéame, a fundraising platform for social causes.

“Desperate screams💔 Yunior was snatched from his old tricycle and the fruits he wanted to sell so hard🍌 He leaves at 3:00 in the morning and works non-stop until nightfall. But they abused him with their fists and this father of 3 children was left with nothing😔,” this appears in a Jompéame publication where a video shows how Yunior was trampled and beaten while they strip him of the fruits.

According to its website, 347 donations have been made so far, and the target amount has been exceeded, totaling more than RD$420,000. The money raised is intended to fully boost his business and provide him with six months of food.

To contribute to the cause.

You can access the Jompéame website or through the following accounts: Banco Popular Current Account: 808206155, BHD León Savings Account: 25342400011, or Banreservas Savings Account 9601722003 in the name of Jompéame, RNC: 430234321. When making the deposit, please place him in the reference «Yunior.» You can also contribute via Paypal, with your miles from Banco Popular or fidepuntos from Altice.

What happened to Junior?

Last Saturday, an audiovisual was broadcast on social networks where Yunior was trampled and beaten. At the same time, members of the Defense of Public Spaces of Santo Domingo Este stripped him of the fruits and the tricycle he used to transport and sell them.

According to a statement shared this Sunday by the Mayor’s Office of Santo Domingo Este, this process involved an eviction in a central avenue of the city due to the fact that an intensive rescue of sidewalks, streets, and parks that had been privatized and derelict for years.

However, it mentions that “the level of violence observed in the aforementioned case does not correspond to the vision of inclusive planning and rescue of the city that is being developed in the municipality.”

Likewise, the statement ensures that the affected person will be compensated, and the case will be investigated. In addition, Mayor Manuel Jiménez, via Twitter, reported the same day that those in charge of the act were suspended and would be sanctioned.

The city needs to be held accountable for this atrocity done against a hardworking man. Some those so called municipal police thinks that they have the right to mistreat citizens in such way. Hopefully one day somebody will give them what they deserve.

What happened to this vendor and many other people of the streets who commit minor infractions is they become victims of heavy-handed summary police justice. It is a cultural behavior. In the home children who misbehave are ignored or shouted at. The children accept this briefly and continue their poor behavior as if nothing has happened. It is only when they are slapped around do they adjust their poor conduct. It is the same on the streets. Police shout at the scofflaws, the scofflaws move on or ignore the police, the scofflaws who do not move or not move fast enough are subject to police violence. The police are sending a message to other scofflaws. It is easier for the police to do this than having the extra tasks of arrests and the added workloads associated with arrests.

This police violence rarely happens to white collars, favored, or the privileged unless ordered from higher-ups.